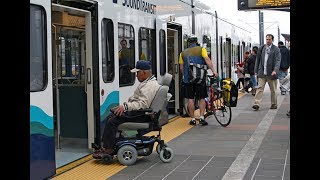 The Americans with Disabilities Act turned 28 this July. The ADA was signed into law on July 26th, 1990 by the first President Bush. It prohibits discrimination against people with disabilities in all areas of public life.

Traditionally, Capitol Hill marks the day, and, one way or another, the White House issues a statement, and someone in the House or the Senate sponsors a declaration. Full-throated, mealy mouthed -- some administrations are keener than others -- but what doesn't happen on the anniversary is nothing. And, yet, that's what happened this year for the second time in a row. You guessed it, the first two years of the Trump administration marked the first time that this landmark civil rights anniversary passed without official anything.

Was the people's House too busy? Well, not too busy to do other things. Under Majority Leader Kevin McCarthy, the House found time to consider the Private Property Rights Protection Act, the Mill Springs Battlefield National Monument Act, even HR 6077, the National Comedy Center Recognition Act, but not the ADA.

But that doesn't mean there was silence on Capitol Hill.

Again this year, disabled rights activists flooded into Washington at the end of July for the annual conference of the National Council on Independent Living. A couple of days ahead of the anniversary, they walked, wheeled, and scooted their way up to the Capitol for their annual rally and lobby day. You can see my coverage on Facebook; we have a report coming up.

What difference does inclusion make? Without it, you can make a lot of bad decisions. From DC, I returned to New York, a city that's just spent hundreds of millions of public dollars on subway renovations that totally ignored one in six New Yorkers.

Just this month, the 39th Avenue station in Astoria, Queens reopened after eight months and $30 million spent on what was supposed to be complete reconstruction. It came back gleaming: light, airy, with new digital displays and new covered waiting areas, new platforms, new stairs, and that was it -- new stairs. Like 75 percent of New York City stations, the lovely, new 30th Avenue station still has no elevator. And that's not unusual, according to a recent report by the NYC comptroller. More than 600,000 senior citizens, children under five, and mobility-impaired New Yorkers live in neighborhoods without a single elevator-accessible subway station.

The new MTA chief swears he'll do better. He just hired the first ever disability activist as a senior adviser, but getting sued helped. The MTA is right now in the process of settling a huge class action lawsuit filed under the ADA.

Knowing what we know about the Trump administration's treatment of women, immigrants, people of color, queers, and jewish Americans, it's more important than ever that we stand up for the ADA and all our civil rights laws.

The independent living activists are pushing for the Disability Integration Act (DIA), which would make it even stronger. For your anniversary act, how about seeing if your representative is signed on? You can, at NCIL.ORG.

Related Topic(s): Activist; Ada Accommodations; Disabilities, Add Tags
Add to My Group(s)
Go To Commenting
The views expressed herein are the sole responsibility of the author and do not necessarily reflect those of this website or its editors.