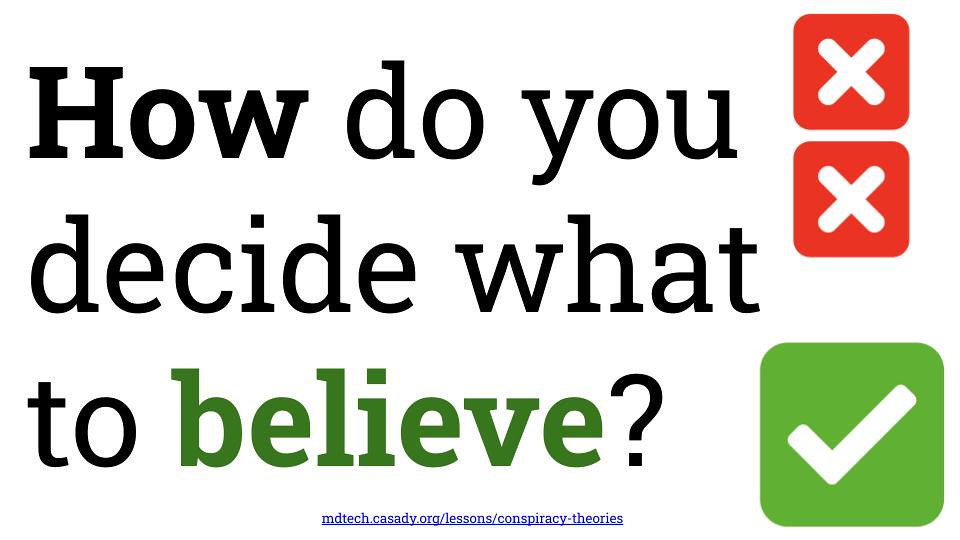 How do you decide what to BELIEVE?
(Image by Wesley Fryer from flickr)   Details   DMCA

On Thanksgiving Day, I found myself playing the role of our family's crazy uncle (or in my case, crazy grandfather). I had just published an article in OpEdNews called "QAnon in Religious & Historical Perspective: We're all Illuminati & Satanists." There, I had tried to argue that there's room for dialog with the far right - even with QAnon fanatics.

My family would have none of it. They accused me of giving aid and comfort to the enemy. They wondered if I too had become a conspiracy theorist.

I didn't deny it.

In fact, over long years of living, reading, observing and dialoging with radicals outside the mainstream culture, I've gradually drawn the conclusion that conspiracy theories are not only valuable and necessary. They also correct officially disseminated misinformation by agencies such as the CIA whose programs have the expressed intention of deceiving the American public and shaping world opinion accordingly.

After all, it was CIA director, William Casey, who said infamously, "We will know that our disinformation program has been successful, when everything (emphasis added) the American people believe is false."

More recently, another former head of the CIA, Secretary of State Mike Pompeo, bragged that the Agency "lies, cheats, and steals" all the time. In fact, he said, the CIA educates its personnel with entire academic courses on how to do so effectively.

Given those official admissions of deceptive intent, is it any wonder that so many of us espouse alternative explanations for events such as the Kennedy and King assassinations, 9/11, the alleged suicide of Jeffrey Epstein, or the real reasons for world-wide shutdown in the face of COVID-19? Should we be surprised that many speculate about the true power of the CIA and other actors who together might well constitute a shadow government often referenced as the Deep State?

So, let me state my conclusion clearly. My thesis is that the evidence for such hidden power is staring us in the face. It has given many of us exceptionally good reason to reject mainstream media (MSM) sources of information in favor of those I'll list at the end of this piece.

Related Topic(s): COINTELPRO; Conspiracy Theories; Credibility; Misinformation; Truth, Add Tags
Add to My Group(s)
Go To Commenting
The views expressed herein are the sole responsibility of the author and do not necessarily reflect those of this website or its editors.