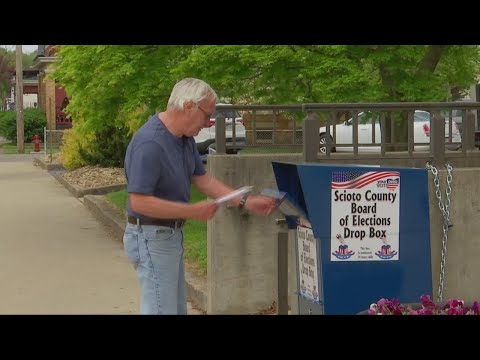 Ohio voters struggle to get their ballots in on time It's a mail-in or drop-off election this year.
(Image by YouTube, Channel: WOWK 13 News)   Details   DMCA

Ohio's Democratic presidential primary winner was never in doubt, but its voting process was.

The April 28 primary, the second statewide vote-by-mail contest since the pandemic interrupted the 2020 election, highlighted new complexities facing voters if the nation shifts to mostly absentee voting this fall.

In addition to postal delivery delays possibly disqualifying hundreds of thousands of ballots -- as was seen in Wisconsin's April 7 primary -- Ohio's saw legally registered voters who waited until the eleventh hour to vote wrestle with the vote-by-mail process and get prevented from casting a ballot that would be counted.

"I went on Twitter and discovered that I could vote [using] a provisional ballot and demand it from them [county election officials]," said Sarah Schoeppner, a grocery worker who recounted her and her father's experience during a briefing by the Lawyers' Committee for Civil Rights Under Law, which runs the nation's largest election protection hotline. "They said that they would give it to us, but that it would probably not be counted because we didn't get the absentee ballot application in on time."

"We believe that Sarah's experience is one encountered by thousands of people across Ohio who are very confused about the deadlines that apply for absentee balloting," said Kristen Clarke, Lawyers' Committee president and executive director. "We are also very concerned about officials who may have discouraged people like Sarah from casting a provisional ballot in person today."

Ohio is the second state with mostly polling place-based voting to rapidly shift to voting by mail in response to the pandemic. (In 2018, 21 percent of Ohio's 8 million registered voters cast absentee ballots.) But unlike a special election in Maryland's seventh House district that was also held on April 28, where Maryland voters who did not receive ballots in the mail were sent PDFs online of their ballot and had more in-person voting options, Ohio's primary voters faced more restrictive rules.

Gov. Mike DeWine, a Republican, canceled the March 17 primary at the last minute due to the pandemic. Initially, Secretary of State Frank LaRose, also a Republican, wanted to send all voters an absentee ballot application and reschedule the vote in June. However, the GOP-majority legislature overrode those plans and imposed a regime where almost all voters had to cast an absentee ballot. There were short timetables to apply for a mail-in ballot, to receive it in the mail, and to return it with a postmark no later than April 27.

"There were a number of restrictions that were in place in Ohio that made voting incredibly difficult," Clarke said. "First, absentee applications were not automatically distributed to voters. The absentee ballot applications did not include postage-paid envelopes. There was an unnecessarily restrictive deadline imposed for the return of the absentee ballot. There were no in-person voting opportunities today [April 28] except for people with disabilities and people who were homeless."

Clarke explained that voters who had applied in time for an absentee ballot, but did not receive it in the mail, were entitled to vote by a provisional ballot. That back-up option combines a voter registration form and a ballot. These voters and ballots are reviewed and authorized before being counted. Even though Ohio counties only had a single in-person voting site, there was widespread confusion over these back-up ballots.

"There was a lot of confusion around this and there were some voters who were told that if they did not request a provisional ballot [when applying for a mail-in ballot], that they shouldn't bother trying to vote today," Clarke said. "That instruction from officials may be in violation of the Help America Vote Act, which allows all voters who believe they are eligible the right to participate in a federal election. And we are looking closely at this."

To make matters worse, as the Ohio primary approached, which also had local elections on the ballot, LaRose wrote to his state's congressional delegation that the U.S. Postal Service was not delivering ballots in time. A scenario was emerging where some volume of voters, already burdened with having to apply for a second time to vote -- to obtain an absentee ballot -- were not poised to receive that ballot and then had to go to limited numbers of in-person voting centers if they wanted to vote.

Thus, like Wisconsin's fraught April 7 primary, where nearly 1.3 million voters requested an absentee ballot and nearly 200,000 ballots did not meet delivery deadlines and were not counted, Ohio's election officials were waiting for 517,000 of the 1.98 million ballots they sent out to be delivered as of April 27, when they had to be postmarked to count.

"We have 1.4 million ballots cast. There are still 500,000 that have not yet been reported back in," said Mike Brickner, Ohio director for AllVotingIsLocal.org, at the Lawyers' Committee briefing on primary day. "There's a lot of concern that many of those ballots may not reach voters in time, and many [voters] do not want to go to the boards of elections today because they have health concerns or other issues."

But unlike Wisconsin, which has Election Day voter registration and still had some in-person voting options (though vastly curtailed due to poll worker shortages), Ohio's all-mail primary had more restrictive rules that raise additional red flags if the pandemic's voting regime continues in the general election.

Steven Rosenfeld  covers democracy issues for AlterNet. He is a longtime print and broadcast journalist and has reported for National Public Radio, Monitor Radio, Marketplace,  TomPaine.com  and many newspapers. (more...)
Related Topic(s): Ohio Election Corruption; Ohio Politics; Pandemic; Primary; Vote-by-mail; Voting, Add Tags
Add to My Group(s)
Go To Commenting
The views expressed herein are the sole responsibility of the author and do not necessarily reflect those of this website or its editors.