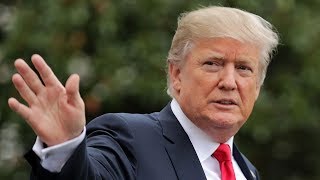 If there was a tipping point for Donald Trump's blatant abuse of Twitter with his hate speech, it may have come when he recently posted a series of tweets warning of a second Civil War if he were to be impeached and removed, quoting Pastor Robert Jeffress on Fox & Friends. Even one Republican lawmaker called the remark "beyond repugnant." Since then, Trump has used Twitter to further hype possible civil unrest, demand the arrest of Democratic leaders, and publicly target the whistleblower who came forward to detail the Ukraine collusion scandal which led to the House's impeachment inquiry.

This all means Trump violates Twitter's clearly stated user guidelines with abandon, yet the social media giant does nothing. Today, Democrats led by presidential hopeful Kamala Harris are demanding Twitter do to Trump what they would do to any other user whose account constantly ignores the rules: kick him off. "When Trump is using his tweets to make threats, incite violence and intimidate witnesses, this is insufficient," Harris recently wrote to the company in response to Twitter taking more non-action against Trump. "Others have had their accounts suspended for less offensive behavior."

Lots of users have made that key point. "Black folks in particular get suspended and banned for the smallest of infractions so don't tell me something can't be done about Trump's feed," stressed BlackWomenViews on Twitter. "We operated just fine for 44 Presidents not spewing bile daily on Twitter. #Kamala is right."

Dumping Trump from Twitter would rob Trump of a critical communications platform. It would also go a long way toward restoring some dignity to our public dialogue. And yes, private companies are well within their rights to deny service to customers who chronically fail to follow the rules of conduct. (I.e., this is not a freedom of speech issue.)

I'm a strong proponent of the media denying Trump the oxygen he so desperately craves. That's why I've suggested it's time for news outlets to rethink sending teams of reporters to cover the White House when daily press briefings have been jettisoned. And that's why it makes no sense to send dozens of reporters to yell questions at Trump on his way to boarding a helicopter on the grounds of the White House. (Instead, send two or three reporters in the form of a press pool.)

Related Topic(s): Trump Attacks Democrats; Trump Insults; Trump Tweets; Trump Twitter Freak; Twitterer In Chief, Add Tags
Add to My Group(s)
Go To Commenting
The views expressed herein are the sole responsibility of the author and do not necessarily reflect those of this website or its editors.