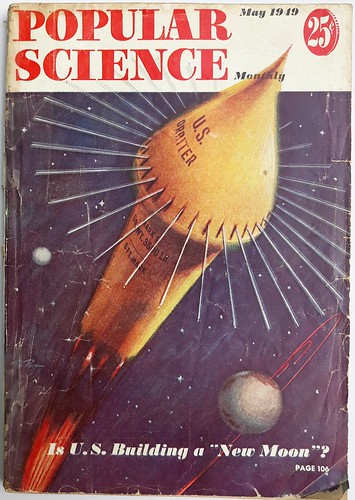 I'm sure most would agree that maintaining an "attitude of gratitude" about life is best. However, in balance, it might be good to consider that which never came into existence. Robert Kennedy famously remarked, "I dream of things that never were and ask, why not?"

When I attended the 50th Anniversary of my high school graduation, this came to mind. While the '50's and '60's were a time of great turmoil, they also offered a wonderful hope in visionary science that has faded from view today. We would establish ourselves on the moon and other planets. Every copy of "Popular Science" magazine had a graphic cover of some technical dream. We would develop new sources of energy apart from fossil fuels and make electricity "too cheap to meter". Aging would be cured or at least greatly diminished as we came to understand its causes. If you had told me 50 years ago that we would still be victimized by cancer in 2019, I would have thought you were an utter fool. And war? How could anyone believe that the US would ever again engage in a pointless waste of lives and resources that put the nation thru agony as the war in Vietnam did? Unthinkable! The present "improvement" seems to involve the public knowing little and caring less.

How did all this (not) happen? What went wrong? Smartphones and the internet are wonderful inventions but how did we overlook developing the technologies that support our basic survival as with health, aging and energy, across the past half century? How can a family of 4 afford 14K a year for health insurance? Why is US life expectancy declining? Why do I and others still split wood to heat our homes?

I suspect the answer lies in the past by looking at the Roman Empire and its evolution. It began with an independent agrarian economy and ended in decay by depending on plunder and slavery which it could no longer support. There's a wonderful word for this. It's one of those amazing compound German words that nicely zeros in on a specific concept: Raubwirtschaft an economy based on robbery.

There are those who take issue with this diagnosis and argue that Rome provided aqueducts, cement, a measure of law and some social welfare benefits. All true but their culture came to depend upon captured slaves, state sponsored terror and raiding nations for profit. It might be best to ask, "How much did they depend on national robbery?" The answer may be simple: so much so that their empire crumbled and ended.

You can go to History.Com and read about "8 reasons why the Roman empire fell". You will be told about overexpansion, excessive military spending, corruption, dependence on a slave economy and neglect of infrastructure among other things. Perhaps this resonates with recent headlines.

It is true that the US economy once depended on slaves and plundering the land of Native Americans, together with exploitation of foreign peoples thought to be inferior. It is also true that the US produced an enormous variety of inventions that vastly changed life for the better. The question here would be, have we drifted into such a perfection of financialization that we are out of balance warring, bullying and coercing our own citizens and the rest of the world for profits apart from the sort of benefits we used to produce? Are we at "late stage Rome"?

As an example, consider all the TV advertisements for new drugs ending in "mab". This suffix refers to "monoclonal antibodies". You might be surprised to know that the average annual price of 'mab drugs is $96,731 and higher if used to treat cancer (2018). Were these the only substances that could be effective? Or just the only ones developed and brought to market? Goldman Sachs admitted that curing patients may not be a sustainable business model. Is comedian Chris Rock correct when he accuses drug companies of being "pushers who want the 'comeback money'"? Ask yourself how this process can possibly continue or how national healthcare can ever be achieved.

We could also consider to what extent student college loans are a form of indentured servitude. They can't be discharged in bankruptcy and are now of such a magnitude as to threaten the general economy as subprime lending did, at $1.5 trillion.

As to foreign policy, what more needs to be said? The US cultivates military hostility either within or towards China, Russia, Iran, Syria, Afghanistan, Iraq, Sudan, Niger, North Korea, Ukraine, Venezuela, Cuba, Yemen, Lebanon, others likely not yet exposed in Africa and possibly Turkey. I recall that the Romans may have sewn the ground with salt in Carthage. Today, in the same part of the world it was found efficient to kill Khadaffi and ruin the lives of an entire nation in pursuit of some imperial purpose. Western powers will enslave weaker nations into debt, dealing with governments that do not represent their people who will be forced to pay something Thomas Jefferson found odious. It's "America First" now, folks. The corollary is "And Devil take the hindmost".

The emerging power of China/Russia is a blessing for humanity in balance. Once US hegemony is broken, poorer nations will have a greater opportunity to get a better deal, amidst competitors. Some African leaders have openly expressed appreciation for Chinese rail and other developments, while criticizing US lecturing.

If it isn't obvious already, talking about expanding the welfare state in the US is futile if the economy depends on an unstable domination of others coupled with intense lobbying for ever more war and weapons. There is always an enemy somewhere who can be used to trigger demand for resources for defense, well ahead of all other needs (such as healthcare, infrastructure, income equality). If none will appear, one can be manufactured as with Iraq and its reputed WMDs (whose presence the Washington Post once called "irrefutable") or perhaps the Gulf of Tonkin resolution. While Trump may boorishly claim to know better than generals, he raises a critical issue. If Progressives ever gain control of the Federal government again, they will have to confront this issue head on or experience the defeat of all their hopes. Giving carte blanche to warmongers as Congress has done is a recipe for disaster, whether it ends in collapse, a nation in decay or WW3 outright.

Could at least one Presidential candidate of either party summon up enough courage to confront nuclear arms treaties as a mature adult and demand that negotiations here be "walled off" and kept strictly separate from other issues? Is that too much to ask? Wouldn't it be great if a Presidential Fire Side Chat of the future said, "feel free to hate Russia as much as you want but working against a future Armageddon is critical and will be separate". Or must we wait years for "Russia, Russia, Russia" to subside because our survival is held hostage by endless partisanship, as encouraged by plunder culture?

Greed is a universal part of human character and will not be eradicated by a new law or stroke of the pen. A Robin Hood economy (as the reverse of the privileged plundering) can be trickier than you might think. Sure, "Steal from the rich and give to the poor" sounds great except that the rich are clever in moving away, paying bribes or offering political contributions for favors (same as bribes). Nevertheless, it may be possible to get back to restraint on greed or its regulation and harness it to create things of general value for others. A huge amount of antitrust legislation would be a good start, especially if technology as developed encourages more centralized power.

Contrary to that, we must also consider the unthinkable. Is it possible that China/Russia can offer many people a better life in contrast to US neo-liberal efforts? The achievements of Nazism and Stalinism were nearly miraculous in their day, at great human cost. In the end, they were defeated as systems by the US and Western nations. The present challenge is the emerging alliance of China/Russia.

An eclectic observer and amateur futurist. A compassionate adult with a high functioning autistic teenage past.

Related Topic(s): Antitrust; Debt; Hegemony; Inventions; Technology; Value, Add Tags
Add to My Group(s)
Go To Commenting
The views expressed herein are the sole responsibility of the author and do not necessarily reflect those of this website or its editors.

Could Vladimir Putin Save The United States?