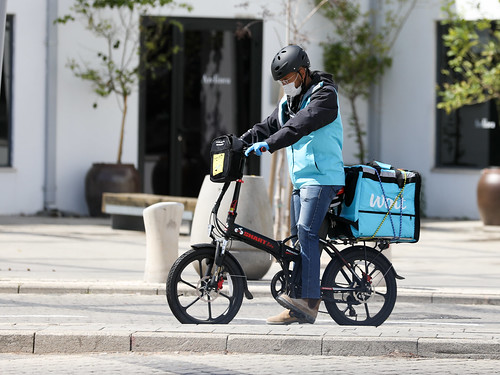 A specter haunts the doorsteps of the First World's health-conscious shut-ins: the specter of the porchetariat. The confrontation which Marx and his followers imagined would take place on the factory floor, now reoccurs every few minutes, anywhere a gig economy worker appears to drop off a package, meal, or bag of groceries.

The porchetariat may seem like an unlikely group to threaten the social order. Although the language of "sharewashing" which once provided cover for these exploitative services has eroded over the years, its legacy continues as these workers continue to lack the social and legal status of full-time workers, no matter how many hours they actually work. Unlike traditional workers, "gig economy" workers are scattered individuals (only connected through the app), paid precarious wages with the absolute least amount of benefits or protections that employers can get away with under local regulations.

Yet, the growth of one-click consumerism has rendered shoppers more and more dependent on the labor of these schlepping sherpas. On top of this the natural, if unconscious, guilt experienced by those who benefit from the exploitation of others, helps us understand how the latent power of the porchetariat has become a source of such spectral fear for their more comfortable benefactees.

To this already volatile mixture comes the COVID-19 pandemic, with all its associated fears, and the resultant enclosure of everyday life. As publics vanish from the traditional public spaces of the city, the virtual space of social media has become the breeding ground of mob mentality.

The anxieties of the one-click consumer class had already come to a head last holiday season, with a social-media-fuelled moral panic over "porch pirates." It turns out that being able to have anything you want delivered to your door is not as stress-free as advertised: you now have to worry about your goods being stolen, perhaps by your very delivery driver! Not surprisingly, the furor over porch piracy was most frenetic in those very cities, such as San Francisco and New York, where rampant gentrification has driven many former residents onto the streets, and economies have become ever-more dependent on out-of-town delivery and gig workers who commute long distances to serve the wealthy in cities they themselves could never afford to live in.

(Of course, nobody cares where these workers are coming from, or where they go after their "gig." They only matter when they are on your porch -- hence, the porchetariat.)

At its most crazed -- and revealing -- the Porch Pirate Panic was celebrated in YouTube video clips in which paranoid consumers -- with an obvious excess of time and money on their hands -- constructed elaborate, expensive traps to waylay any local displaced residents or delivery workers who might be tempted to take a piece of the merchandise piling up on consumer doorsills. Meanwhile, porches have been the key focus for the explosion of private surveillance systems, installed by citizens to spy on their own doors, front yards, and fellow citizens, in a state of increasing paranoia that drives an ever firmer wedge between private and public spaces.

Now, with the spread of COVID-19, the very idea of the modern city -- founded on principles of free circulation, shared public space, and the democracy of the streets -- is to be put on hold. Temporarily, one hopes! The new image of the modern home will be that of the fortress, surrounded by hordes of (fill in the blank: savages, zombies, contaminated neighbors). How long until the anxiety, fear, and guilt of those hunkered in their homes will be transfered onto those workers who take on the risks of travelling through the streets?

We already have one answer to this: the emergence of a security camera that is advertised as using artificial intelligence to tell whether that person at your door is infected. Expect more of this to follow.

We can look to the recent experience of Chinese cities to understand the cycle we are just entering. As more and more people remained shut in, the importance of delivery workers increased. Some even recognized that these workers were performing a heroic service. However, as paranoia over contamination grew, so did fears of delivery workers themselves.

App-wielding Sahibs will have plenty to worry about. How certain can they be that contamination has not spread, along with their food and trinkets, from the ghost kitchens and "fulfillment" warehouses at which they originated? And what of all the doors, doorbells, railings, and so on, that your delivery worker has contacted in passing on the way to yours? Yet once again, we can predict that the out-of-sight will remain out-of-mind. Worries will be focused, not on the distant points of origin, but on the visible points of contact: and the porchetariat will bear the brunt of the paranoia.