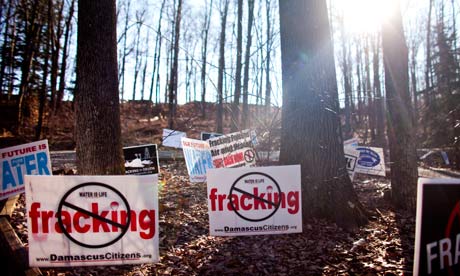 (Image by Unknown Owner)   Details   DMCA
Environmental groups have been disappointed with Obama for, among other things, encouraging fracking for oil and natural gas. Photograph: Jim Lo Scalzo/EPA/Corbis

I saw an odd sight on a quiet, West Village street in New York City on Saturday 6 October. A group of about 30 young women and men -- all naked or topless -- were dancing about, with their flesh painted green.

Patrick Robbins, a 26-year-old native of Brooklyn who works on sustainable development at Cooper Union, is the spokesperson for the group, Occupy the Pipeline. He explained the purpose of the protest-art show hybrid:

"[We're] protesting the pipeline's construction on New York City's West Side Highway and Gansevoort, which is soon to be completed. The pipeline ... is slated to bring hydrofracked gas from the marcellus shale -- a bed that lies under Pennsylvania and New York State -- into New York City's gas infrastructure."

While the health hazards at the point of fracking are well-known, I was not aware of hazards on the consuming end of using fracked gas. According to Occupy the Pipeline, the fracked gas threatens New Yorkers because gas produced from Marcellus shale has 70 times the average radioactivity of natural gas and very high radon content. The trouble with the noble gas (meaning that it is an inert gas) is that it was not one of the issues looked into by the Federal Energy Regulatory Commission when it analyzed the pipeline project. The commission asserted that radon risk assessment was "outside their purview," said Robbins. But the element has been linked to increases in the risk of lung cancer among non-smokers, claims Occupy the Pipeline, and poses a special risk to New Yorkers with immuno-compromised systems the moment the gas is burned -- dispersing the radon.

Other health and safety concerns with fracking are linked to precedent, such as the undrinkable groundwater at Dimock, Pennsylvania, or the explosion from a pipeline of similar size and pressure in San Bruno, California in 2010 that claimed the lives of eight people.

The activists of Occupy the Pipeline assert that the pipeline's construction was part of an anti-democratic process. A moratorium on fracking in New York state has expired; now, Governor Andrew Cuomo is discussing a pilot program for fracking in the five counties of the southern tier in New York state. He refuses to say he will ban fracking altogether, a goal of the activists. As for Councilwoman Christine Quinn, a contender in the New York City mayoral race, she has also kept mum on the pipeline; she did not even send a representative to listen in on the hearings, says Robbins.

"Occupy the Pipeline and the Sane Energy Project have approached her office countless times ... NYH20 sent her a petition letter requesting hearings on the Radon issue; representatives from Food and Water Watch, United for Action and multiple enviro groups met with her a month ago to remind her of the request ... why is Christine Quinn ignoring calls to protect public health?"

There is a government-mandated legal buffer zone between the area to be fracked and the watershed for drinking and household use -- but it is one that Department of Environmental Protection scientists have called inadequate. Fracking involves pumping underground a chemical cocktail that, according to a New York City government report (pdf) about the chemicals, comprises 58% known immune system suppressants and other toxins:

As for the rest, we don't really know what it may contain since that information is protected by "the Halliburton Loophole" -- a Bush administration rollback of environmental regulation under the Clean Water Act. Comments Robbins:

"So they can pump carcinogens into our land and they don't they don't have to tell us what is in it because they say it is 'proprietary information'."

Given all these data, how can New York officials keep silent?

Well, the energy companies, and the major banks that finance them, all donate to the Quinn, Mayor Michael Bloomberg and Cuomo campaigns. Occupy the Pipeline claims that the entities profiting from fracking are "the same old cast of characters," namely: Goldman Sachs, Wells Fargo, JP Morgan Chase and Bank of America. Economists Jeanette Barth, president of JM Barth and Associates, an environmental and economic consulting group, and Deborah Rogers, another energy consultant formerly of Smith Barney and Merrill Lynch, both spoke at a lecture this past April entitled "Frackonomics." They pointed out that in times of crisis, such as we have at present, new growth industries are hyped. Investment companies are parroting the hype around natural gas, claiming that investors will make enormous profits from hydrofracking -- despite the fact that these wells are almost certainly not going to live up to economic promises now being made. The economists' message was:

In light of all this -- with politicians turning a deaf ear to their people's concerns, and companies blinded from the dangers by their greed -- I asked Robbins, "What do you say to people who say Occupy is dead?"

"Occupy has given birth to a thousand more extremely important projects that are all still doing the work of transforming society. The environmental working group, from which Occupy the Pipeline sprung, have participated in all aspects of democratic process -- from NVDA [nonviolent direct action] to attending hearings and submitting testimony."

Author, social critic, and political activist Naomi Wolf raises awareness of the pervasive inequities that exist in society and politics. She encourages people to take charge of their lives, voice their concerns and enact change. Wolf's landmark (more...)
Related Topic(s): Economic; Fracking; Health; Hydrofracking; Pipelineistan; Protest, Add Tags
Add to My Group(s)
Go To Commenting
The views expressed herein are the sole responsibility of the author and do not necessarily reflect those of this website or its editors.