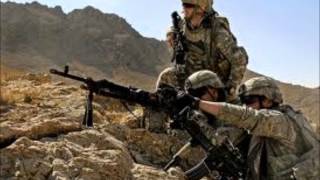 On the eve of the 18-year anniversary of the September 11, 2001, attacks and the illegal U.S. invasion of Afghanistan, the United States and the Taliban completed nine rounds of peace talks with no deal.

Although they had reportedly reached an agreement in principle, Donald Trump insisted on a secret meeting at Camp David with the Taliban and the puppet Afghan government so he could take credit as dealmaker-in-chief. The idea of finalizing the negotiations at Camp David was "a prospect that appealed to the president's penchant for dramatic spectacle," The New York Times reported.

Trump, however, abruptly canceled the meeting, slated to occur last weekend, citing a Taliban car bombing that killed an American.

There are "questions about the accuracy of [Trump's] assertion that the Taliban had accepted his invitation to Camp David on Sunday, and that he was the one calling off the meeting," according to The New York Times. "Taliban negotiators said Sunday that they had agreed to come to the United States only after a deal was announced and only to meet with the American side, suggesting that Mr. Trump may have canceled a meeting that the key participants were not planning to attend."

Trump's excuse for calling off the Camp David meeting is also belied by Secretary of State Mike Pompeo's claim that the United States was responsible for "over a thousand Taliban killed in just the last 10 days alone."

Two days after cancelling the meeting, Trump told reporters the peace talks with the Taliban are "dead as far as I'm concerned."

The Tentative Peace Deal Would Leave Thousands of U.S. Troops in Afghanistan

There are currently 14,000 U.S. troops in Afghanistan. Under the Trump administration's tentative agreement with the Taliban, the U.S. would pull 5,400 troops out of Afghanistan within 135 days of signing, reducing the number to 8,600. This would still leave more U.S. troops in Afghanistan than the 8,400 who were there when Barack Obama left office. The remaining troops would be withdrawn gradually over a 16-month period.

In return, the Taliban would agree to not support international terrorist groups and would prevent terrorists from using Afghanistan to mount attacks. The Taliban would also conduct political negotiations with the Afghan government (although it's unclear how these would fare, given that a senior Taliban leader told The New York Times, "we do not recognize the [U.S.'s] stooge government" in Kabul.)

However, even if a firm deal were negotiated, Trump stated, "we're going to always have a presence" in Afghanistan. U.S. envoy Zalmay Khalilzad reportedly said the United States would reserve the right to help Afghan government forces in the event they are attacked by the Taliban. And senior White House advisers favor secretly increasing the CIA's presence in Afghanistan as U.S. forces withdraw.

The Taliban, however, see little difference between U.S. military forces and CIA agents, and have repeatedly maintained that they will not agree to a ceasefire until all U.S. troops are withdrawn from Afghanistan.

Meanwhile, although many politicians are criticizing Trump for arranging the Camp David meeting with the Taliban, few are questioning the legality of the United States invading Afghanistan in the first place.

The U.S. Invasion of Afghanistan Was Illegal

The U.S. military invasion of Afghanistan violated the United Nations Charter, which mandates that countries settle their disputes peacefully. The Charter forbids the use of military force except in self-defense or with Security Council authorization. The invasion was not lawful self-defense, as it did not respond to an armed attack by Afghanistan. The 9/11 attacks were not carried out by the Afghan government. And although the Council passed Resolutions 1368 and 1373 in response to the 9/11 attacks, neither resolution authorized the United States to use military force against Afghanistan. Instead, the resolutions condemned the 9/11 attacks; ordered the freezing of assets and criminalization of terrorist activity; urged steps to prevent terrorist activity, including sharing of information; and advocated ratification and enforcement of international conventions against terrorism.

Since 9/11, under the guise of George W. Bush's "war on terror," the United States has illegally attacked, invaded and bombed several countries and tortured untold numbers of people, with no legal accountability.

At the end of 2018, The New York Times reported that regional Afghan forces led by the CIA "operated unconstrained by battlefield rules designed to protect civilians, conducting night raids, torture and killings with near impunity."

Related Topic(s): Accountability; Afghanistan War; CIA; Meeting; Military; Taliban, Add Tags
Add to My Group(s)
Go To Commenting
The views expressed herein are the sole responsibility of the author and do not necessarily reflect those of this website or its editors.