Nick Robinson looks back at the life of Margaret Thatcher

Margaret Thatcher, who has died following a stroke, was one of the most influential political figures of the 20th Century.

Her legacy had a profound effect upon the policies of her successors, both Conservative and Labour, while her radical and sometimes confrontational approach defined her 11-year period at No 10.

Her term in office saw thousands of ordinary voters gaining a stake in society, buying their council houses and eagerly snapping up shares in the newly privatized industries such as British Gas and BT.

But her rejection of consensus politics made her a divisive figure and opposition to her policies and her style of government led eventually to rebellion inside her party and unrest on the streets.

Margaret Hilda Thatcher was born on 13 October 1925 in Grantham, Lincolnshire, the daughter of Alfred Roberts, a grocer, and his wife, Beatrice.

Her father, a Methodist lay preacher and local councillor, had an immense influence on her life and the policies she would adopt.

"Well, of course, I just owe almost everything to my own father. I really do," she said later. "He brought me up to believe all the things that I do believe."

She studied natural sciences at Somerville College, Oxford, and became only the third female president of the Oxford University Conservative Association.

After graduating she moved to Colchester where she worked for a plastics company and became involved with the local Conservative Party organisation.

In 1949, she was adopted as the prospective Conservative candidate for the seat of Dartford in Kent which she fought, unsuccessfully, in the 1950 and 1951 general elections.

However, she made a significant dent in the Labour majority and, as the then youngest ever Conservative candidate, attracted a lot of media attention.

In 1951 she married a divorced businessman, Denis Thatcher, and began studying for the Bar exams. She qualified as a barrister in 1953, the year in which her twins Mark and Carol were born.

She tried, unsuccessfully, to gain selection as a candidate in 1955, but finally entered Parliament for the safe Conservative seat of Finchley at the 1959 general election.

Within two years she had been appointed as a junior minister and, following the Conservative defeat in 1964, was promoted to the shadow cabinet.

When Sir Alec Douglas-Home stood down as Conservative leader, Mrs Thatcher voted for Ted Heath in the 1965 leadership election and was rewarded with a post as spokeswoman on housing and land.

She campaigned vigorously for the right of council tenants to buy their houses and was a constant critic of Labour's policy of high taxation. 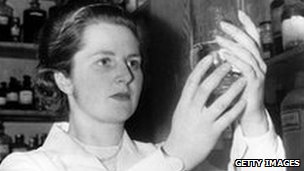 When Ted Heath entered Downing Street in 1970, she was promoted to the cabinet as education secretary with a brief to implement spending cuts in her department.

Related Topic(s): Death; Margaret Thatcher; Stroke, Add Tags
Add to My Group(s)
Go To Commenting
The views expressed herein are the sole responsibility of the author and do not necessarily reflect those of this website or its editors.