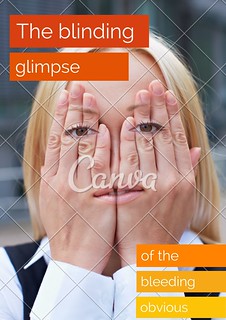 The greatest danger at present is that two levels of discourse are being commingled in the US today: One is the editorializing that I and others like me do. The other has to do with the facts about news events that are really happening.

I don't mean the different narratives of the political right and left. I'm mean the lack of a clear separation between editorializing and the news.

A good example of the facts is the complete and utter failure of our current government to deal with several problems of epic proportions. My evidence? Immigration reform, an underfunded educational system, a crumbling infrastructure, a healthcare system of run-away prices and unsatisfactory medical outcomes, an unnecessarily complex and unfair tax system, destruction of our public natural resources for private financial gains, a frightening disparity in the distribution of wealth, and an economic system that is devouring itself by reducing the financial ability of its consumers to consume its products and services.

While our politicians' obfuscate, the media aids and abets under the guise of neutrality. The effect is to obscure the facts with fables like contrived economic arguments that prove we cannot afford to be a first world country, manufactured outrage at those on the other side of the aisle and whoever is the president, ungrounded arguments about mishandling international policy, empty rhetoric about why we need to militarily intervene everywhere, and the best of all, the claim to be an outsider (after decades of incumbency) and hate the government you created and want to be re-elected to run.

In the place of news we are flooded with simple-minded sound bites that will earn the distribution needed to produce the most profit and create an illusion that the echo chamber within which we each live is a true representation of reality.

While the new practice in journalism is to give lies as much space as truth in the name of neutrality, we are increasingly being pitied for our ignorance.

Being pitied is very telling. It reveals another truth that the rest of the world knows, but somehow fails to capture our attention: Our pathologies are showing.

We are number one in military power, incarcerated people, billionaires, corporate profits, CEO salaries, childhood poverty, disparity in wealth and income distribution and lest we forget, belief in angels.

China, India, a slowly unifying Europe, South American countries like the geographical giant Brazil, an enterprising Chile and oil rich Venezuela, are all competitors who see us as a clumsy, scary, militarized giant.

They know we are like a distracted audience in thrall to a good magician. Except in this case it's slight of mouth instead of slight of hand .

I'm not alone in my sentiments: care2.com, "Americans are seriously lacking faith in the system -- in fact, trust in the U.S. government is at an all-time low. According to the latest CNN poll, just 13% of Americans agree that the U.S. government "can be trusted to do what is right always or most of the time."

But wait. There is one more first where we don't even have a close competitor. "The US has been voted as the most significant threat to world peace in a survey across 68 different countries.

A global survey conducted by the Worldwide Independent Network and Gallup at the end of 2013 "asked: "Which country do you think is the greatest threat to peace in the world today?" The US topped the list, with 24 percent of people believing America to be the biggest danger to peace. Pakistan came second, with 8 percent of the vote and was closely followed by China with 6 percent. Afghanistan, Iran, Israel and North Korea came in joint fourth place with 5 percent of the vote."

Elections are coming. Let's be sure to put these same folks back in office.

Related Topic(s): Economic; Government; Journalism; Lies; Making A Difference; Military; People; People; Scary; Truth; (more...) Truth, Add Tags  (less...)
Add to My Group(s)
Go To Commenting
The views expressed herein are the sole responsibility of the author and do not necessarily reflect those of this website or its editors.