Click Here to Remove All Ads
Source: The Guardian
Some eager-to-believe progressives heralded the speech as a momentous change, but Obama's actions are often quite different than his rhetoric 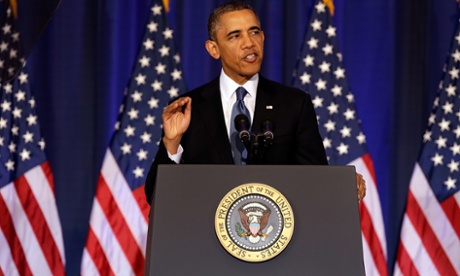 The hallmark of a skilled politician is the ability to speak to a group of people holding widely disparate views, and have all of them walk away believing they heard what they wanted to hear. Other than Bill Clinton, I've personally never seen a politician even in the same league as Barack Obama when it comes to that ability. His most consequential speeches are shaped by their simultaneous affirmation of conflicting values and even antithetical beliefs, allowing listeners with irreconcilable positions to conclude that Obama agrees with them.

The highly touted speech Obama delivered last week on US terrorism policy was a master class in that technique. If one longed to hear that the end of the "war on terror" is imminent, there are several good passages that will be quite satisfactory. If one wanted to hear that the war will continue indefinitely, perhaps even in expanded form, one could easily have found that. And if one wanted to know that the president who has spent almost five years killing people in multiple countries around the world feels personal "anguish" and moral conflict as he does it, because these issues are so very complicated, this speech will be like a gourmet meal.

But whatever else is true, what should be beyond dispute at this point is that Obama's speeches have very little to do with Obama's actions, except to the extent that they often signal what he intends not to do. How many times does Obama have to deliver a speech embracing a set of values and polices, only to watch as he then proceeds to do the opposite, before one ceases to view his public proclamations as predictive of his future choices? Speeches, especially presidential ones, can be significant unto themselves in shaping public perceptions and setting the terms of the debate, so Obama's explicit discussion of the "ultimate" ending of the war on terror can be reasonably viewed as positive.

Related Topic(s): Obama; Obama Effect; Obama Hope; Obama_and_Foreign_Affairs, Add Tags
Add to My Group(s)
Go To Commenting
The views expressed herein are the sole responsibility of the author and do not necessarily reflect those of this website or its editors.