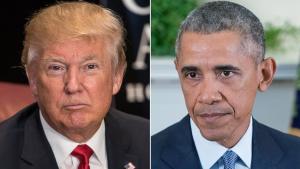 "Some members of the ruling classes believe that their survival depends on America controlling or crushing the rest of the world."

Throughout the 2016 presidential campaign the corporate media, Democratic Party operatives and the pundit class all proclaimed that Donald Trump is a fascist. The fascistic nature of our political, law enforcement and economic systems were conveniently omitted from these warnings, but assertions of Trump's untrustworthiness were repeated endlessly. If that characterization has any validity at all then Barack Obama's establishment of a de facto Propaganda Department is a terrible blow to democracy.

On December 23, 2016 Obama signed the National Defense Authorization Act (NDAA), a federal law that is passed every year. NDAA authorizes defense appropriations but it is also used as a Trojan horse to hide attacks on civil liberties. In 2011 the NDAA authorized indefinite detention of anyone deemed a terrorism suspect. Tucked inside this year's NDAA was the passage of the Countering Disinformation and Propaganda Act which establishes the little known or discussed Global Engagement Center.

The title seems benign enough until one reads its mission. "The purpose of the Center shall be to lead, synchronize, and coordinate efforts of the Federal Government to recognize, understand, expose, and counter foreign state and non-state propaganda and disinformation efforts aimed at undermining United States national security interests."

"Obama's establishment of a de facto Propaganda Department is a terrible blow to democracy."

In plain English, this act establishes an official propaganda arm of the United States government. Of course there has always been governmental coordination used to spread lies about American foreign policy. The government doesn't even have to work very hard because the corporate media usually march in lock step and repeat their every claim uncritically. But these are dangerous times for the American hegemon. Its ability to continue exercising imperial control has been damaged by foreign governments successfully resisting its efforts and by the election of Donald Trump.

Trump has questioned the need for NATO, pledged to end regime change, and to improve relations with Russia. These are reasonable policy decisions or rather they would be if the worldwide neo-liberal regime didn't feel so threatened. What should be simple disagreements are treated as omens of the end of the world. Perhaps they do signal the end for some members of the ruling classes who believe that their survival depends on America controlling or crushing the rest of the world.

"This act establishes an official propaganda arm of the United States government."

The recent Washington Post/Jeff Bezos/Democratic Party effort to name websites such as Black Agenda Report as agents of Moscow will now be official government policy. The anonymous minders of the Is it Propaganda or Not site will no longer have to be invisible. They can come out of the closet and apply for grant money just like a university or an NGO with all the right connections. They can then work hand-in-hand with the bipartisan war party as it demonizes and silences anyone who refuses to make common cause with their schemes.

The head of this Global Engagement Center will be appointed by the president and that means Donald Trump. On the one hand we are told that Trump's presence in the White House is a fundamental danger to democracy. But in true presidential fashion Obama has handed off to Trump what he thinks is most important to continue.

That is a consistent pattern from one administration to the next. Despite any differences they may highlight before an election, they all act like made men in the gangster clique after the votes are cast. Presidents pardon one another and their associates, and in so doing let criminals go free. Trump won't "lock up" Hillary Clinton because he will want his successor to let him off the hook for any crimes he should commit during his term in office. The man whom Obama labeled unfit for the presidency will now be the propaganda commander-in-chief.

"They all act like made men in the gangster clique after the votes are cast."

While Democrats wait for inauguration day in nervous anticipation of Trump policy changes the rulers continue to ignore them. Obama hasn't spoken to the concerns of the rank and file since Election Day. He has, however, repeated warnings about "fake news" and Russian influence. His legacy is dead, a sham. His signature achievement, the Affordable Care Act, will be repealed. All of his foreign policy machinations have come to nothing. His interference in Ukraine and regime change attempt in Syria succeeded in bringing Russia and China closer together to counter American influence. Russia, Syria, Turkey and Iran meet to discuss the future and fortunately do so without an American presence. Vladimir Putin no longer bothers with trying to engage the people he used to call "our American partners." When Obama expelled Russian diplomats in a fit of impotent pique, Putin declined to do the same. Why bother when he knows he has won.

Related Topic(s): Donald Trump; Global Engagement Center; Ndaa; Obama; Propaganda; Propaganda Wars, Add Tags
Add to My Group(s)
Go To Commenting
The views expressed herein are the sole responsibility of the author and do not necessarily reflect those of this website or its editors.