Cross-posted from The Guardian
In a familiar pattern, White House claims about what motivated the killing of the US ambassador in Libya are now contradicted 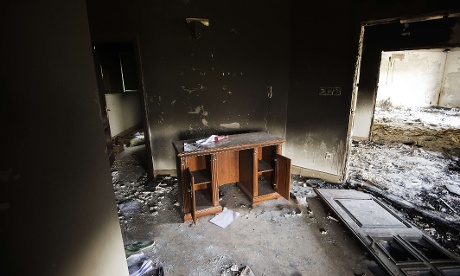 (Image by Unknown Owner)   Details   DMCA
Damage inside the burnt US consulate building in Benghazi. Libya said it has made arrests and opened a probe into the attack. Photograph: Gianluigi Guercia/AFP/Getty Images

Almost immediately after President Obama announced the killing of Osama bin Laden, top government officials, including then-CIA Director Leon Panetta and top terrorism adviser John Brennan, made numerous false statements about what took place. That included the claim that Bin Laden was killed after he engaged in a "firefight," that he used his wife as a human shield to protect himself, and that he was living in luxury in a $1m mansion.

None of those claims, central to the story the White House told the world, turned out to be true. Bin Laden was unarmed and nobody in the house where Bin Laden was found ever fired a single shot (a courier in an adjacent guest house was the only one to shoot, at the very beginning of the operation). Bin Laden never used his wife or anyone else as a shield. And the house was dilapidated, showed little sign of luxury, and was worth one-quarter of what it was claimed. Numerous other claims made by the administration about the raid remain unanswered because of its steadfast insistence on secrecy and non-disclosure (except when it concerns Hollywood filmmakers).

Would it have mattered had the White House been truthful about the Bin Laden raid from the start? It would have undoubtedly made no difference for many people, who simply craved Osama bin Laden's death without regard to how it was done. But it certainly would have made a difference for at least some people around the world in terms of how they perceived these actions and whether they approved -- which is presumably why the White House was so eager to insist on these falsehoods and to ensure that the world's perception was shaped by them. (Please spare me the "fog of war" excuse: when the so-called "fog of war" causes the US government to make inaccurate claims that undermine its interests, rather than bolster them -- as always happens -- then that excuse will be plausible.)

Related Topic(s): Ambassador; American Quandry Over Libya; Killing; Obama Administration; Obama Kills Osama; Violence, Add Tags
Add to My Group(s)
Go To Commenting
The views expressed herein are the sole responsibility of the author and do not necessarily reflect those of this website or its editors.