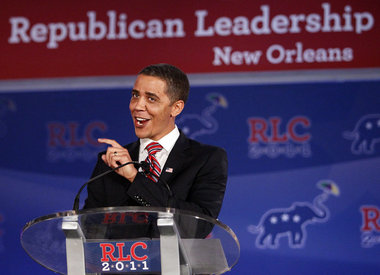 (Image by Unknown Owner)   Details   DMCA
div> Reggie Brown, an Obama impersonator, performed at the Republican Leadership Conference (RLC) and was cut short due to "racist" content.
Was this an "I'm sorry" or a "So what" moment for the Republican Party?
Reggie Brown was doing a show at the Republican Leadership Conference when the show was cut short. The liberal media, particularly during an election cycle, was ready to take full advantage of any miscues. And they were served one on a silver platter.
Was this a "so what" moment for the Republican Party, or did it put itself in a position where regardless of what the moment actually was, it now has to address an issue that should never have been an issue in the first place.
Is this racism?
To be honest if the jokes were re-tooled and used discussing a white candidate or president would they be considered racist or just judged on whether they were funny or not funny?
Definitely the latter but that is the nature of politics and the Republican leadershipshould be fully aware of that fact!
Stories that Republicans DON'T want to be reading about how the RLC Conference brought in an entertainer to tell racist jokes about President Obama!
From Think Progress:
"Prior to a speech by RNC Chair Reince Preibus, an Obama impersonator took the stage and told a series of racist jokes. A summary from  Arron Blake :

 On Black History Month: "Michelle celebrates the full month. I celebrate half."

 "My mother loved a black man," but "she was not a Kardashian."

 A picture was shown of Obama and the first lady when he took office. The impersonator then showed a picture of what the Obamas will look like when the president leaves office, and it was the characters of Fred Sanford and his sister-in-law, Ethel, from the show "Sanford and Son."

Hey Republicans, leave nothing to chance!
One thing that can be said with certainty is that this type of entertainment should never have been booked unless the event organizers were 100% sure of the content and 100% comfortable with it.
Edgy political humor is great but it poses a risk, particularly in a political venue where the mainstream media is ready to pounce on any miscue and turn it into a political firestorm.
One of the keys to a Republican victory in 2012 is that the party should not allow itself to be put into a position where it has to apologize for its actions.
Is this performance apology worthy?
It doesn't matter what I think but it matters what the general public thinks.

Related Topic(s): Hate-Racism-Bigotry; Obama; Republican; Satire, Add Tags
Add to My Group(s)
Go To Commenting
The views expressed herein are the sole responsibility of the author and do not necessarily reflect those of this website or its editors.