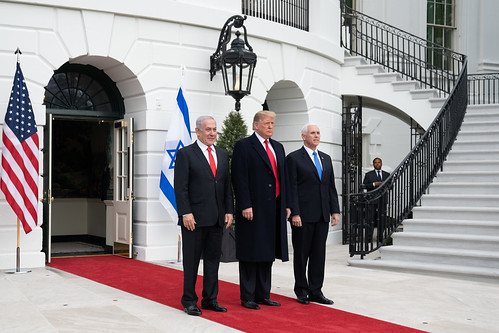 It's all about Israel. The current danger is that Trump will countenance a skirmish with Iran, in order to help Israeli Prime Minister Netanyahu do well enough in the Sept. 17 election to retain power and not incidentally stay out of jail.

This unique article (below) published exactly six years ago, goes a long way toward explaining the stakes involved:

JERUSALEM President Obama's position on Syria punish President Bashar al-Assad for using chemical weapons without seeking to force him from power has been called "half-pregnant" by critics at home and abroad who prefer a more decisive American intervention to end Syria's civil war.

Israeli officials have consistently made the case that enforcing Mr. Obama's narrow "red line" on Syria is essential to halting the nuclear ambitions of Israel's archenemy, Iran. More quietly, Israelis have increasingly argued that the best outcome for Syria's two-and-a-half-year-old civil war, at least for the moment, is no outcome.

For Jerusalem, the status quo, horrific as it may be from a humanitarian perspective, seems preferable to either a victory by Mr. Assad's government and his Iranian backers or a strengthening of rebel groups, increasingly dominated by Sunni jihadis.

"This is a playoff situation in which you need both teams to lose, but at least you don't want one to win we'll settle for a tie," said Alon Pinkas, a former Israeli consul general in New York. "Let them both bleed, hemorrhage to death: that's the strategic thinking here. As long as this lingers, there's no real threat from Syria."

The synergy between the Israeli and American positions, while not explicitly articulated by the leaders of either country, could be a critical source of support as Mr. Obama seeks Congressional approval for surgical strikes in Syria. Some Republicans have pushed him to intervene more assertively to tip the balance in the Syrian conflict, while other politicians from both parties are loath to involve the United States in another Middle Eastern conflict on any terms.

But Israel's national security concerns have broad, bipartisan support in Washington, and the American Israel Public Affairs Committee, the influential pro-Israel lobby in Washington, weighed in Tuesday in support of Mr. Obama's approach. The group's statement said nothing, however, about the preferred outcome of the civil war, instead saying that America must "send a forceful message" to Iran and Hezbollah and "take a firm stand that the world's most dangerous regimes cannot obtain and use the most dangerous weapons."

After years of upheaval in the Middle East and tension between Mr. Obama and Prime Minister Benjamin Netanyahu of Israel, the two leaders are now largely in sync on how to handle not just Syria, but also Egypt. Mr. Obama has not withheld American aid to Egypt after the military-backed ouster of the elected Islamist government, while Israel strongly backs the Egyptian military as a source of stability.

Ray McGovern works with Tell the Word, the publishing arm of the ecumenical Church of the Saviour in inner-city Washington. He was an Army infantry/intelligence officer and then a CIA analyst for 27 years, and is now on the Steering Group of Veteran Intelligence Professionals for Sanity (VIPS). His (more...)
Related Topic(s): Donald Trump; Iran; Iran Versus Israel; Israel; Israel Attacks Syria; Israel Syria Conflict; Israel Versus Iran, Add Tags
Add to My Group(s)
Go To Commenting
The views expressed herein are the sole responsibility of the author and do not necessarily reflect those of this website or its editors.