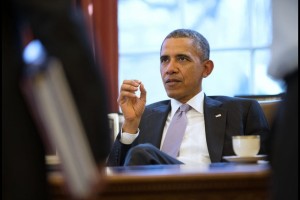 We the undersigned are veteran intelligence, military, and law enforcement officers. Taken together, our years of service to our country total nearly 200 years. Unlike many experts and advisers who base their arguments on abstract notions about the international scene, our insights are drawn from a depth of hands-on experience inside the U.S. government -- here and abroad.

Given this background, we share a profound understanding of the great responsibility that accompanies great power. We feel an obligation to lay our views on Ukraine before you -- the more so, inasmuch as the airwaves, TV, and newspapers are giving a great deal of space to the same pundits and academics who got Iraq so wrong just over a decade ago.

A number of us, in our government roles, were involved with policy relating to the then-Soviet Union and also with its successor state, the Russian Federation. We have observed the recent slide of Moscow toward a more authoritarian form of government and have also been concerned over the playing-out of great power rivalry over Ukraine.

Our still-vivid memories of the Cold War and the harm it inflicted on the world's security prompts us to argue that the troubles in Ukraine should not be permitted to usher in a return to a bipolar world in which two heavily armed superpowers confront each other at every level, including on a global scale.

We are particularly concerned over what appears to be a largely unfocused yet virulent mood among members of Congress and the mainstream media to "do something" about Russia -- a sentiment that is both ill-advised and quite the reverse of what this nation should be doing to nurture a constructive and ultimately beneficial relationship with Moscow and the rest of Europe.

While we support U.S. efforts to aid the development of a pluralistic democracy in Ukraine, including assistance in conducting free and fair elections, we believe that military support and direct involvement by U.S. troops is a step that will virtually guarantee escalation of the conflict, possibly leading to direct confrontation between two nuclear-armed great powers -- a situation that should, and can, be easily avoided if the interests of all countries, including Russia, are taken into account.

To put it in stark terms, Russian engagement with Ukraine -- a country that is on Moscow's doorstep and which is, in part, ethnically Russian -- does not threaten vital U.S. interests; nor does it threaten any U.S. allies. Washington's response should be a measured one, based on the actual risks versus possible gains. Sanctions should be employed with considerable restraint, as their effectiveness is questionable and they frequently serve only to harden adversarial positions. Significant military moves, whether unilateral or in conjunction with NATO, should be avoided as they can be seen as provocative while providing no solution to existing disagreements.

We argue for more, not less, diplomatic engagement, based on our own experience as witnesses to many missed opportunities over the past 50-plus years, in which the United States -- to our regret -- has found itself all too often on the wrong side of history. The Bay of Pigs fiasco in 1961 entrenched communism in Cuba; indiscriminate U.S. support of anti-communist groups and political parties in Europe both weakened fledgling democracies and strengthened corruption; overtures by former Soviet President Mikhail Gorbachev for complete nuclear disarmament were dismissed, encouraging nuclear proliferation among other states.

When the Soviet Union finally fell, specific agreements not to expand into the former Warsaw Pact states were promptly ignored, with both NATO and the European Union quickly moving eastward. The rape of the Russian economy in the 1990s, engineered by Western "entrepreneurs" working with local oligarchs followed. It was described as "shock therapy" at the time, but most Russians more accurately view the events as wholesale pillage, fueling much of the current mistrust of the West.

Russia could hardly have been expected to ignore Washington's de facto encouragement and achievement of "regime change" in Ukraine -- resulting in the unseating of the duly elected (though thoroughly corrupt) government in Kiev. Moreover, continued efforts by the West to draw Ukraine into NATO would guarantee Russian hostility for many years to come. Both of these are existential issues for Moscow; may we remind you of the U.S. parallel in the enforcement of the Monroe Doctrine in our own "backyard."

In our view, the situation need not spin out of control. The door is still open to enforcing the measures agreed upon on April 17 in Geneva. Russia's willingness to continue to work with us on destruction of Syria's chemical weapons and on the Iranian nuclear issue remains encouraging and could foster cooperation on other mutual interests.

As for Crimea, with all the misleading rhetoric filling the air waves, we want to remind you that Crimea became part of Russia in the late 18th Century. Sixty years ago, Ukrainian Nikita Khrushchev, who was then head of the Soviet Communist Party, simply gave Crimea to the Ukraine -- one of the 15 "republics" comprising the former Union of Soviet Socialist Republics (USSR). There was no referendum at the time; it appeared not much more than a formality since all areas of the USSR danced to Moscow's tune.

The transfer of Crimea to Ukraine began to matter significantly in 1991, when the Soviet Union imploded and Crimeans found themselves no longer citizens of Russia. President Vladimir Putin addressed this directly in his major speech of March 18 when he recalled that Russia had "humbly accepted" the situation in 1991. He explained that Russia "was going through such hard times then that realistically it was incapable of protecting its interests."

Consortiumnews.com was founded by Robert Parry in 1995 as the first investigative news magazine on the Internet. The site was meant to be -- and has become -- a home for important, well-reported stories and a challenge to the inept but dominant (more...)
Related Topic(s): Obama Effect; Obama Issues Policy; Propaganda; Russia; Ukraine; Veteran Intelligence Professionals For Sanity; Vladimir Putin, Add Tags
Add to My Group(s)
Go To Commenting
The views expressed herein are the sole responsibility of the author and do not necessarily reflect those of this website or its editors.