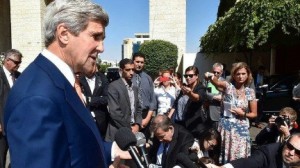 With the July 17 shoot-down of Malaysia Airlines Flight 17 over Ukraine turning a local civil war into a U.S. confrontation with Russia, former U.S. intelligence veterans urge President Obama to release what evidence he has about the tragedy and silence the hyperbole...

U.S.-Russian intentions are building in a precarious way over Ukraine, and we are far from certain that your advisers fully appreciate the danger of escalation. The New York Times and other media outlets are treating sensitive issues in dispute as flat-fact, taking their cue from U.S. government sources.

Twelve days after the shoot-down of Malaysian Airlines Flight 17, your administration still has issued no coordinated intelligence assessment summarizing what evidence exists to determine who was responsible -- much less to convincingly support repeated claims that the plane was downed by a Russian-supplied missile in the hands of Ukrainian separatists.

Your administration has not provided any satellite imagery showing that the separatists had such weaponry, and there are several other "dogs that have not barked." Washington's credibility, and your own, will continue to erode, should you be unwilling -- or unable -- to present more tangible evidence behind administration claims. In what follows, we put this in the perspective of former intelligence professionals with a cumulative total of 260 years in various parts of U.S. intelligence:

We, the undersigned former intelligence officers want to share with you our concern about the evidence adduced so far to blame Russia for the July 17 downing of Malaysian Airlines Flight 17. We are retired from government service and none of us is on the payroll of CNN, Fox News, or any other outlet. We intend this memorandum to provide a fresh, different perspective.

As veteran intelligence analysts accustomed to waiting, except in emergency circumstances, for conclusive information before rushing to judgment, we believe that the charges against Russia should be rooted in solid, far more convincing evidence. And that goes in spades with respect to inflammatory incidents like the shoot-down of an airliner. We are also troubled by the amateurish manner in which fuzzy and flimsy evidence has been served up -- some of it via "social media."

As intelligence professionals we are embarrassed by the unprofessional use of partial intelligence information. As Americans, we find ourselves hoping that, if you indeed have more conclusive evidence, you will find a way to make it public without further delay. In charging Russia with being directly or indirectly responsible, Secretary of State John Kerry has been particularly definitive. Not so the evidence. His statements seem premature and bear earmarks of an attempt to "poison the jury pool."

We see an eerie resemblance to an earlier exercise in U.S. "public diplomacy" from which valuable lessons can be learned by those more interested in the truth than in exploiting tragic incidents for propaganda advantage. We refer to the behavior of the Reagan administration in the immediate aftermath of the shoot-down of Korean Airlines Flight 007 over Siberia on August 30, 1983. We sketch out below a short summary of that tragic affair, since we suspect you have not been adequately briefed on it. The parallels will be obvious to you.

An advantage of our long tenure as intelligence officers is that we remember what we have witnessed first hand; seldom do we forget key events in which we played an analyst or other role. To put it another way, most of us "know exactly where we were" when a Soviet fighter aircraft shot down Korean Airlines passenger flight 007 over Siberia on August 30, 1983, over 30 years ago. At the time, we were intelligence officers on "active duty." You were 21; many of those around you today were still younger.

Thus, it seems possible that you may be learning how the KAL007 affair went down, so to speak, for the first time; that you may now become more aware of the serious implications for U.S.-Russian relations regarding how the downing of Flight 17 goes down; and that you will come to see merit in preventing ties with Moscow from falling into a state of complete disrepair. In our view, the strategic danger here dwarfs all other considerations.

Consortiumnews.com was founded by Robert Parry in 1995 as the first investigative news magazine on the Internet. The site was meant to be -- and has become -- a home for important, well-reported stories and a challenge to the inept but dominant (more...)
Related Topic(s): Evidence; Putin; Russia; Ukraine; Veteran Intelligence Professionals For Sanity; Veterans, Add Tags
Add to My Group(s)
Go To Commenting
The views expressed herein are the sole responsibility of the author and do not necessarily reflect those of this website or its editors.