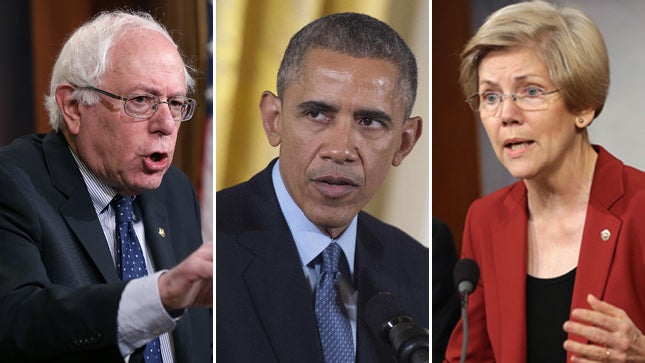 In 2016, Barack Obama privately told advisers he would intervene if it appeared as though Bernie Sanders threatened to clinch the nomination away from Hillary Clinton.

Last month's story about this threatened to undercut Obama's warning to Democrats earlier this year about not engaging in the so-called "circular firing squad" despite his doing just that when he cautioned Democrats against moving "too far left."

Yet not only are there reports about Obama extolling Sen. Elizabeth Warren to the wealthy donors she aggressively eschews.

A source close to Barack Obama confirms the 44th president will actually "go to bat" for whoever secures the Democratic nomination--even if it's Vt. Sen. Bernie Sanders.

"Look, we have a field that is very accomplished, very serious and passionate and smart people who have a history of public service, and whoever emerges from the primary process, I will work my tail off to make sure that they are the next president."

It's refreshing the establishment Democratic party is at least showing signs of learning from its mistake in 2016.

" I'm not a big Sanders Stan [sic] but I will support him if he's the nominee. People, Trump's re-election is an existential threat. If you do not think the GOP is watching these attacks and will amplify them in the general, you're wrong."

It remains to be seen, though, whether the center will hold its support after the primary season kicks off next month and reality begins.

The corporate media, moderate Democrats, and the wealthy and corporations are terrified of a Sanders or Warren presidency, and will do everything in their affluent power to prevent either one from moving into 1600 Pennsylvania Ave.

However, as New York magazine reported:

Related Topic(s): Democratic; Democrats; GrassRoots; Moderate; Politicians; Progress; Sanders-Bernard, Add Tags
Add to My Group(s)
Go To Commenting
The views expressed herein are the sole responsibility of the author and do not necessarily reflect those of this website or its editors.