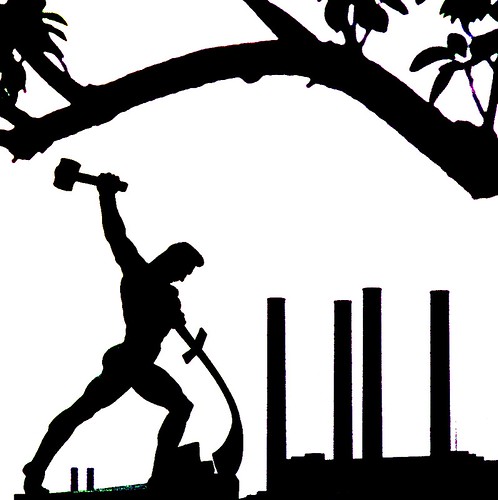 New York - United Nations .Swords into Plowshares.
(Image by David Paul Ohmer)   Details   DMCA
President Obama's final speech to the UN goes beyond any-thing anyone has ever heard in terms of hypocrisy: it's too bad his Nobel can't be parlayed into a prize for phoniness. It was a beautifully crafted speech -- I'm sure he and Michelle burned the midnight oil to produce it -- but I don't think many leaders appreciated it.

This man, who has ordered the assassination without trial of hundreds (thousands?) of American and other civilians by drone, who can't get along with the heads of other states whose world views dare to differ from his, who paints a rosy picture of reality while ensuring that it will never come to pass, insulting in passing most of the inhabitants of planet earth, probably doesn't even realize that other people rightly mock his words, in a triumph of propaganda in which the perpetrator comes to believe his own lies.

When Obama was first elected, like hundreds of thousands of other people of good will, I believed he would be able to make a difference, but I soon realized that he had merely been 'allowed' to become the Democratic candidate in 2008 by the Clintons, on condition he do as he was told by the real powers that be, or risk the fate of Kennedy.

There appears to be growing contest between authoritarianism and liberalism right now. And I want everybody to understand, I am not neutral in that contest. I believe in a liberal political order -- an order built not just through elections and representative government, but also through respect for human rights and civil society, and independent judiciaries and the rule of law.

When I held conversations with the leaders of the Cuban revolution in the early sixties, they would say that democracy was fine on paper, but in practice it enabled the ruling class to get its way. I filed that opinion away for possible future reference. All these years later, and even after the end of the Cold War, a US-led West resoundingly demonstrates its truth. Here's a great red herring:

I believe the road of true democracy remains the better path. I believe that in the 21st century, economies can only grow to a certain point until they need to open up -- because entrepreneurs need to access information in order to invent; young people need a global education in order to thrive; independent media needs to check the abuses of power.

Next, Obama claims that:

In Europe, the progress of those countries in the former Soviet bloc that embraced democracy stand in clear contrast to those that did not. After all, the people of Ukraine did not take to the streets because of some plot imposed from abroad.

The problem with that statement is that the alternative press is full of accounts of Eastern European disappointment in the Western way of doing things to which they gained access by joining the (US-backed) European Union. Many regret the old days, when they could walk the streets safely at night and everyone had free medical care and education, especially given that the benefits of the neo-liberal upheaval of their economies go only to the 1%.

In a world that left the age of empire behind, we see Russia attempting to recover lost glory through force. Asian powers debate competing claims of history.

Here Obama lumps Russia and China together, inadvertently acknowledging that the US considers them a major threat, which they are, potentially. What separates Obama from his counter-parts is that these latter have not the slightest interest in besting the US: they just refuse to accept its claim to hegemony. As for Russia using force, the US repeats this claim daily in order to prepare the public for the war it plans to launch to gain access to Russia's vast mineral wealth. In the latest iteration, prominent Europeans are warning that Russia could take over the continent in the blink of an eye - just exactly as they did during the Cold War, when the US installed Pershing missiles in Germany to supposedly counter this threat.

Across the region's conflicts, we have to insist that all parties recognize a common humanity and that nations end proxy wars that fuel disorder.

Unbelievable! The US has engaged in several wars during the last two decades, none of which has ceased, and it is currently in its fifth year of devastating efforts to bring down the democratically elected Syrian government. Hutzpah is putting it mildly.

And this leads me to the fourth and final thing we need to do, and that is sustain our commitment to international cooperation rooted in the rights and responsibilities of nations.

No other country on earth has mocked international cooperation more than the US. Perhaps the reason is a lack of mastery of the English - or any other - language: for the US, cooperation means accepting its orders.

Related Topic(s): Allies; Assassination; Conflict; Deceit; Democracy; Fascist; History; International; Obama; People; (more...) Reality; Revolution; Speeches, Add Tags  (less...)
Add to My Group(s)
Go To Commenting
The views expressed herein are the sole responsibility of the author and do not necessarily reflect those of this website or its editors.