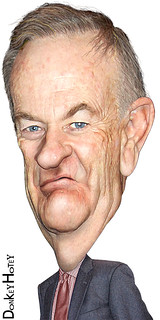 "The reason there is so much violence in the black precincts is the disintegration of the African American family."

"About 73 percent of all black babies are born out of wedlock. That drives poverty and the lack of involved fathers leads to young boys growing up resentful and unsupervised."

O'Reilly goes on to blame the Obama administration along with all those who advocate on social justice issues with denial of this "real cause." He asks, "When is the last time you've seen a public service ad telling black girls to avoid becoming pregnant." He then goes on to name Obama, Jackson, Sharpton, The Black Caucus, and NBC's "PC Pundits" asserting that they ignore the problem as evidenced by the lack of such and ad.

Next he makes his case for urban violence and poverty being the natural result of the poor decisions of blacks to have children out of wedlock. He rails at the entertainment industry for glorifying "gangsta culture" saying that "as these so-called entertainers get rich, the kids who emulate their lyrics and attitude destroy themselves." In short he blames Hollywood and derelict black parents for urban poverty, violence, drugs, and the disproportionate incarceration of blacks.

Wow. There is so much distortion, bad analysis, and bigotry here it's hard to know where to begin. But let's start with the '73% of black babies are born out of wedlock' statistic. In his book Dear White America (pg. 45) Tim Wise analyses this statistic as follows:

"The fact is, birth rates for black women under the age of 18 (almost all of them unmarried) have fallen by more than a third since the early 1900s, and fertility rates among all unmarried black women have plummeted since the 1970s. The reason the share of black babies being born out of wedlock has increased, despite these two statistical trends, is that two-parent black couples are having far fewer children than similar couples in previous generations. If "intact" black families have far fewer children, those children who are born in the black community will show an increased ratio born "out of wedlock," but this will have little to do with irresponsible behavior on the part of single black folks, whose behavioral norms have only "improved" (using our apparent definition of that concept) in recent decades."

O'Reilly's opening premise is wrong. It's poverty, not race or black culture, which breeds the ills he rails against.

The cycle of poverty has been deepened by shallow bigoted thinking like O'Reilly's. The conservative attacks on Planned Parenthood, food stamps, minimum wage increases, and other programs that seek to break the cycle can only make it harder for urban youth to make good choices, and O'Reilly's real agenda has little to do with authentically addressing the "Race Problem" and everything to do with stoking the fear and anger of the conservative base he feeds upon. His fans feel justified by this sophist rant and circulate it to defend against inconvenient civic responsibilities.

There is far more wrong with O'Reilly's opinion than I want to write about here; and you've probably heard similar views from conservative acquaintances. If you'd like to debunk those conversations, read Dear White America. Wise has made it his life work to ferret out the facts of racial bias and analyze them intelligently. He documents his sources. You may not like all of what Wise says, but you can trust it as authentic.

Richmond Shreve is a retired business executive whose careers began in electronics (USN) and broadcasting in the 1960s. Over the years he has maintained a hobby interest in amateur radio, and the audio-visual arts while working in sales and (more...)

Related Topic(s): Culture; Hate-Racism-Bigotry; Poverty; Poverty In America; Race; Race African American Black Negro, Add Tags
Add to My Group(s)
Go To Commenting
The views expressed herein are the sole responsibility of the author and do not necessarily reflect those of this website or its editors.

What is Coffee Party USA?

O'Reilly -- On Obama and the Race Problem

How I Became a "Bestselling" Author