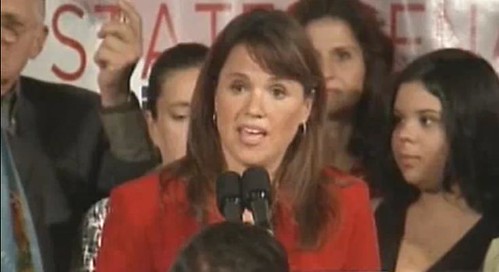 *To my fans, this isn't typically the kind of article I publish. But, I think this story is a good opportunity to take some poetic licenses. So far, it seems I pulled this article off; I've gotten good comments on DailyKos and Open Salon. Enjoy.

Tea Party candidate Christine O'Donnell's victory over nine-term Rep. Mike Castle in Delaware's Republican Senate primary Tuesday night may have been a signal that a significant number of Delaware citizens are willing to support candidates who like to preach to Americans on what they should and should not do sexually.

Last night MSNBC's Rachel Maddow played a video of her appearance on MTV's "Sex in the "90s," which shows exactly what O'Donnell means when she talks about being opposed to rubbing one out every now and then:

O'DONNELL: My name is Christine O'Donnell. I am the president and founder of the SALT. The SALT stands for the Saviors Alliance for Lifting the Truth.

We choose sexual purity in our lives. We have God-given sexual desires. And we need to understand them and preserve them to be used in God's appropriate context.

TODD HITCHCOCK, YOUTH PASTOR: The Bible is clear in the fact that it says that any sexual act outside of the realm of marriage is wrong.

Dorm life has evolved into a blending of the sexes, from coed buildings to coed floors, coed bathrooms and now even coed rooms.

All this coedness is outside normal life, said Miss O'Donnell. "Most average American adults don't use coed bathrooms - if they had the option of a coed bathroom at a public restaurant, they wouldn't choose it." Coedness "is like a radical agenda forced on college students," she said.

Kevin Gosztola is managing editor of Shadowproof Press. He also produces and co-hosts the weekly podcast, "Unauthorized Disclosure." He was an editor for OpEdNews.com
Related Topic(s): 2010 Elections; Armageddon; Christine O-donnell; Faith; Feminism; God; Humor; Jesus; Midterm Elections; Military; (more...) Reproductive Rights; Sex; Sex Education; Tea Party Movement; Teabaggers, Add Tags  (less...)
Add to My Group(s)
Go To Commenting
The views expressed herein are the sole responsibility of the author and do not necessarily reflect those of this website or its editors.