"A tiny minority tiny minority wants to pretend that nothing has happened," Lawrence O'Donnell said. "A tiny minority with guns marched into the State Capitol in Michigan today to lobby in their raucous way against the governor's request that the legislature extend Michigan's stay at home order. The Republican legislature bent to the will of a couple of hundred people with guns in a state of 10 million people. Of course, America has everything. So America has a tiny tiny number of people relatively speaking around the country who protest saying scientific safety measures, measures to keep them alive. And since television cameras love the colorful; and what's more colorful than protesters with guns. TV news will always wildly overemphasize that kind of protest which in fact only represents a very very very tiny sliver of the American population. Protests of the same size for any liberal cause in America would not attract a single television camera.

During the Occupy movement, many of us with the Coffee Party USA and other organizations visited large encampments in Washington DC, Providence Rhode Island, San Diego, Austin, Houston, and many other locales. We rarely saw any news coverage. Yes, New York and Philadelphia got their share but nothing like a much then lesser movement, the Tea Party.

In my town, a very Conservative Red Kingwood Texas, we occupied a corner of the town center for 52 consecutive weeks in the cold, in the rain, in the heat, and during thunderstorms. The only real coverage we got was our final Saturday after contacting all of the area mainstream media sources. 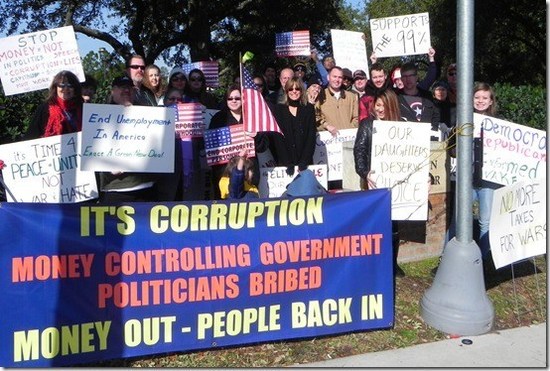 Occupy was definitely the seed for many of us who made commitments to independent media. That is likely the true genesis of Politics Done Right. It is a shame that Progressives must still fight as hard as we must for coverage henceforth supporting and developing our own.

Please join our YouTube channel so we can get the numbers up to open up some more features and reach more folks. Gracias!

Related Topic(s): Ideology Liberal, Add Tags
Add to My Group(s)
Go To Commenting
The views expressed herein are the sole responsibility of the author and do not necessarily reflect those of this website or its editors.