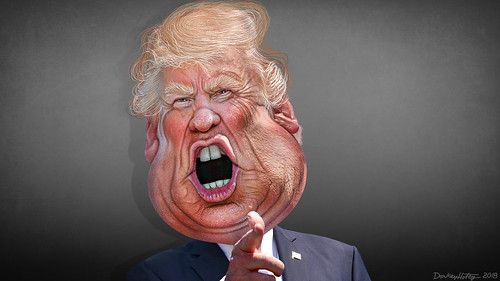 (in memory of Walt Whitman)


O Captain, my Captain, your fearful term's half-done.
You brazenly rule in the White House, not beholden to anyone.
Republican lackeys lick your boots like fawning cocker spaniels
while you tweet your hate and bigotry and dump on Stormy Daniels.
But O things fall apart!
O the bleeding States of red!
You don't want States to go for blue,
you'd rather see them dead.


O Captain, my Captain, you're bloating the national debt,
just the opposite of what you promised---but you're not finished yet.
Another tax cut for the Super-rich is surely in the works
while you fleece your fans who still defend you, the poor deluded jerks.
My Captain toadies to dictators
of every size and stripe.
He never met a tyrant
whom he doesn't like.


O Captain, my Captain, you infantile old-fogey,
your twisted brain's preoccupied with burying Jamal Khashoggi
so the Saudis can buy billions of weapons at US taxpayers' expense,
spreading war and terrorism. Can you really be so dense?
Ho Captain, you swindler,
Your Base are sorely misled
swallowing your lies and gimmickry.
Are they all brain-dead?

My Captain does not answer, he has no use for critics.
He's busy praising White Nationalists who are racist and anti-Semitic.
The employment numbers are phoney. His cowering staff take orders
while he foments trade-wars, trashes the environment, and obsesses over borders.
Exult O Trumpites, and ring O bells!
But I with creeping dread
fear American Democracy
will soon be bloody dead.

O Captain! my Captain! our fearful trip is done,
The ship has weather'd every rack, the prize we sought is won,
The port is near, the bells I hear, the people all exulting,
While follow eyes the steady keel, the vessel grim and daring;
But O heart! heart! heart!
O the bleeding drops of red,
Where on the deck my Captain lies,
Fallen cold and dead.

O Captain! my Captain! rise up and hear the bells;
Rise up--for you the flag is flung--for you the bugle trills,
For you bouquets and ribbon'd wreaths--for you the shores a-crowding,
For you they call, the swaying mass, their eager faces turning;
Here Captain! dear father!
This arm beneath your head!
It is some dream that on the deck,
You've fallen cold and dead.

My Captain does not answer, his lips are pale and still,
My father does not feel my arm, he has no pulse nor will,
The ship is anchor'd safe and sound, its voyage closed and done,
From fearful trip the victor ship comes in with object won;
Exult O shores, and ring O bells!
But I with mournful tread,
Walk the deck my Captain lies,
Fallen cold and dead.

Related Topic(s): Democracy; Donald Trump; Donald Trump; Elections, Add Tags
Add to My Group(s)
Go To Commenting
The views expressed herein are the sole responsibility of the author and do not necessarily reflect those of this website or its editors.