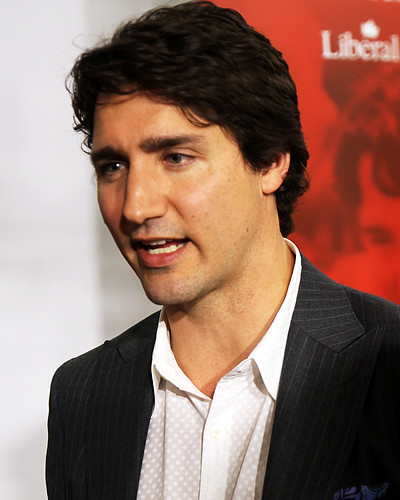 Justin Trudeau
(Image by Alex Guibord)   Details   DMCA
Photogenic Prime Minister Justin Trudeau seems like a cool guy (if you ignore the photos from his trip to India). And Canada seems like a cool and enlightened country for having things like single-payer health insurance and legalized weed. But it has become a bad actor on the international stage, facilitating some of the worst U.S. foreign policies and damaging the planet with its toxic oil. As a dual citizen, I'm saddened by this behavior.

Since Trudeau first came to office in 2015, he has made a great show of passion for reducing global warming. And, as Bill McKibben pointed out, Canadian delegates "pushed at the Paris climate talks for a tougher-than-expected goal: holding the planet's rise in temperature to 1.5C (2.7F)" (Guardian, 4/17/17). However, Trudeau has also been a vigorous supporter of extracting and exporting tar sands oil from northern Alberta.

Tar sands are "a mixture of mostly sand, clay, water, and a thick, molasses-like substance called bitumen." Bitumen is liquefied into oil. The tar sands are the 3rd largest reserve of petroleum in the world (after Venezuela and Saudi Arabia). According to the NRDC, the life cycle of a barrel of tar sands crude from extraction to combustion emits 17-20% more carbon than other types of crude. "That means burdening the planet with an extra 178.3 million metric tons of greenhouse-gas emissions annually, the same impact as 38.5 million passenger vehicles or 45.8 coal-fired power plants." But Trudeau is adamant that Canada should profit from its dirty oil. As he told a cheering oil industry gathering in 2016, "No country would find 173 billion barrels of oil in the ground and leave them there."

Canada's environmental crime is starkly visible from the air. Hundreds of square miles of boreal forest have been stripped away to make room for open-surface mines. You can fly over 97 sq. miles of tailings ponds holding a total of 1.3 trillion liters of wastewater left over from the mining process. The contents are "a poisonous brew of organic acids, benzene, lead and fine clay particles that have not significantly settled out in 50 years." These ponds are leaking into groundwater and nearby waterways.

The 2972-mile Keystone Pipeline System, completed in 2011, carries tar-sand oil from Alberta to refineries in the American Midwest and gulf coast. Environmental activists are celebrating President Biden's cancellation of a permit that Trump had granted to Canadian mega-corporation TC Energy to build the Keystone XL pipeline--an 1197-mile addition to the Keystone system. The KXL would have carried an increase of 830,000 barrels of dirty oil per day. Alberta's Conservative Premier Jason Kenney called Biden's decision a "gut punch" and an insult, but the Trudeau administration seems resigned to it.

2. In the service of Empire

On June 18 Canada lost to Norway and Ireland in its bid for a 'western bloc' seat on the UN Security Council. This was its second loss since 2010. If you want a red-pill experience of Canadian foreign policy, look no further than a petition submitted last year to the United Nations by the Canadian Foreign Policy Institute. It was titled: VOTE NO TO CANADA SECURITY COUNCIL SEAT. Its thousands of signatories included Noam Chomsky and David Suzuki. The petition lists and documents nine important ways in which Canada has been a bad actor on the international stage.

The petition's complaints include the large volume of arms sales that "have fueled conflicts across the globe, including the devastating war in Yemen." As reported in Ricochet, on Jan. 25 anti-war activists in Hamilton, Ontario, blocked a shipment of $15 billion in "Canadian-made light armoured vehicles to Saudi Arabia."

Another complaint is that tar-sands oil has put Canada on track to greatly exceed the limit on greenhouse gases it agreed to in the 2015 Paris Agreement. "Already among the world's highest per capita emitters, the Canadian government is subsidizing further growth of heavy-emitting tar sands, at the expense of impoverished nations who've contributed little to the climate crisis but bear the brunt of its impacts."

The petition points out that the Trudeau administration has allied itself with Trump's imperialist foreign policy in Latin America. For instance, it has propped up "repressive, corrupt and illegitimate governments in Haiti and Honduras." As Ben Norton reported in The Grayzone, "The US embassy in Ottawa boasted in a March 2017 memo, 'Canada Adopts "America First" Foreign Policy,' just after PM Trudeau appointed hard-line hawk Chrystia Freeland as foreign minister." Freeland is now Deputy Prime Minister and Minister of Finance--obviously a powerful associate of Trudeau.

Canada has vigorously supported Trump's repeated attempts at regime change in Venezuela. As I explained in a previous article, crippling U.S. economic sanctions have been a death sentence for tens of thousands of Venezuelans since 2017. Canada cooperated in this murderous behavior by enacting its own sanctions. Trudeau has worked hard to assemble a group of conservative Latin-American nations (the Lima Group) to support the removal of Venezuelan President Maduro. This group endorses the continuing U.S. refusal to recognize Venezuela's elections as legitimate, including the latest one on Dec. 6 in which Maduro's socialist coalition won 68% of the vote.

As Fiona Edwards explains, "The privatisation of Venezuela's oil reserves - the largest in the world - is a massive motivation for the US." John Bolton made it clear in 2019: it would be great if "we could have American oil companies really invest in and produce the oil capabilities in Venezuela." Yves Engler notes that Canada has a similar interest in Venezuela: the country has large reserves of gold. Maduro's predecessor, Hugo Chavez, nationalized several Canadian gold-mining ventures in Venezuela.

What has happened to Canada? P. Greanville says it well: "Like vampires fearing light, capitalist elites have always been afraid of the socialist demonstration effect." Wherever socialism raises its head, in Bolivia, Nicaragua, Chile, Cuba or Venezuela, it must by all means necessary be made to fail.

Related Topic(s): Canada; Oil; Sanctions; Sands; Venezuela, Add Tags
Add to My Group(s)
Go To Commenting
The views expressed herein are the sole responsibility of the author and do not necessarily reflect those of this website or its editors.