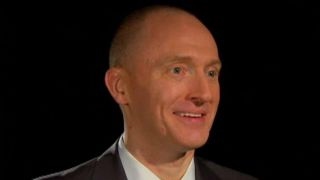 The long-awaited House Intelligence Committee report made public today identifies current and former top officials of the FBI and the Department of Justice as guilty of the felony of misrepresenting evidence required to obtain a court warrant before surveilling American citizens. The target was candidate Donald Trump's adviser Carter Page.

The main points of what is widely known as the "Nunes Memo," after the House Intelligence Committee Chair Devin Nunes (R-Calif.), have been nicely summarized by blogger Publius Tacitus, who noted that the following very senior officials are now liable for contempt-of-court charges; namely, the current and former members of the FBI and the Department of Justice who signed off on fraudulent applications to the Foreign Intelligence Surveillance Court: James Comey, Andy McCabe, Sally Yates, Dana Boente and Rob Rosenstein. The following is Publius Tacitus's summary of the main points:

From what Michael Isikoff reported in September 2016, it appears that the CIA and the Director of National Intelligence (as well as the FBI) are implicated in spreading the disinformation about Trump and Russia. Isikoff wrote:

"U.S. intelligence officials are seeking to determine whether an American businessman identified by Donald Trump as one of his foreign policy advisers has opened up private communications with senior Russian officials -- including talks about the possible lifting of economic sanctions if the Republican nominee becomes president, according to multiple sources who have been briefed on the issue.

Who were the "intelligence officials" briefing the select members of the House and Senate? That will be one of the next shoes to drop. We are likely to learn in the coming days that John Brennan and Jim Clapper were also trying to help the FBI build a fallacious case against Trump, adds Tacitus.

Indeed, Rep. Greg Walden (R-OR), Chair of the House Energy and Commerce Committee, has already indicated that his disclosures in the Nunes Memo represent just "one piece of a probably much larger mosaic of what went on."

The Media Will Determine What Comes Next

Ray McGovern works with Tell the Word, the publishing arm of the ecumenical Church of the Saviour in inner-city Washington. He was an Army infantry/intelligence officer and then a CIA analyst for 27 years, and is now on the Steering Group of Veteran Intelligence Professionals for Sanity (VIPS). His (more...)
Related Topic(s): Crime; FISA; Intelligence; Isikoff; Nunes Memo; Surveillance, Add Tags
Add to My Group(s)
Go To Commenting
The views expressed herein are the sole responsibility of the author and do not necessarily reflect those of this website or its editors.