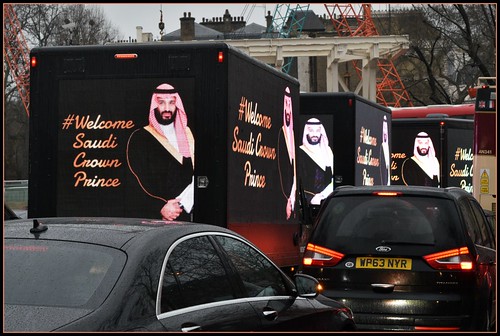 Saudi Crown Prince Mohammed bin Salman Visits London
(Image by Loco Steve)   Details   DMCA
r populumpoetry="y">I swear these socialists make mountains from moles, And yowl, squawk and squeal like hungry new foals, Over Nothing 'bout Nothing and then back again, Sticking the good guys with the point of their pen, Making them suffer for pursuing the good, And doing what patriots for our nation should. . I refer to the effort to sell Saudis nuke, And that talking head Hedges who's but a kook, For screaming foul play and hoping to spike A lot of huge contracts that Yankees will like, Like 'em for jobs and duration and bucks, Which contrar' to Chris is not the true crux. . 'Cause who's pushing this deal for 40 nuke plants? Not Putin, Maduro, or the Ku Klux Klants, But our gen'rals and diplomats, ties straight and tight, Execs who fly jets and make deals left and right, I mean guys with clearance who know the dark skinny, And daily shave bare their chinny-chin-chinny. . They're the guys we count on to run this world straight, And I listen up if they say Salman's great, Yeah, I've heard the story: he topped a harsh scribe, And would have done better to slip him a bribe, And he enRitzed some sheikhs and made 'em sleep nervous, Though in cells with saunas and snappy room service. . His war on the Houthis has been no success, For war is hell: our guys know its excess, But look on the bright side: his citizens thrive: They're watching blockbusters and the women can drive! If that ain't a vision for peace and prosper' My name is Mud and my butt's in the air. . But he pushes clean E and everyone carps: That's nuke for H-bombs, they say, hid under tarps, Which Iran will take for evil intentions, And quickly raise high the level of tensions, When nothing could really be further from true, Against which our good guys would bet their cut-crew. . Hedges and his rads'd better hear what I say: Trust in our patriots who plan to make hay, For workers, for Wall Street, themselves a bare penny, Since t'would be a shame if they didn't get any. So just sit back, Chris, worry not of their toil: If it all goes sideways, it's on Saudi soil.

Related Topic(s): Nukes; Satire; Satire; Saudi Arabia Ben Salmon, Add Tags
Add to My Group(s)
Go To Commenting
The views expressed herein are the sole responsibility of the author and do not necessarily reflect those of this website or its editors.