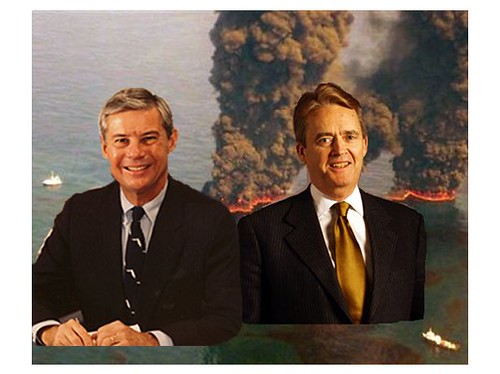 In his weekly radio address on Saturday, May 22nd, President Obama selected the two men that will be leading an independent commission that will examine the Gulf of Mexico oil spill, find the "root causes" of the disaster, and produce a report in six months. Those men were former Sen. Bob Graham (D-FL) and former head of Environmental Protection Agency (EPA) under George H.W. Bush, William K. Reilly, a Republican.

President Obama said in his address, "If the laws on our books are inadequate to prevent such an oil spill, or if we didn't enforce those laws -- I want to know it...I want to know what worked and what didn't work in our response to the disaster, and where oversight of the oil and gas industry broke down."

BP has been hiding reports and video on the disaster, low balling estimates on the amount of oil that has leaked into the Gulf, and ignoring orders or requests issued by federal agencies dictating recommendations and guidelines for the cleanup. The government has allowed BP to continue to handle this disaster in this manner, which might lead one to believe this commission might simply be one where oil & gas companies involved in offshore drilling (especially BP) could use the disaster to re-brand their company's image, regain the confidence of politicians, up their contributions to key political leaders, and continue to obstruct movement toward clean, renewable energy in America. With Graham and Reilly on the commission, it's far more likely that this commission will advance a much different agenda---a nuclear energy agenda.

Both Graham and Reilly have records that show each possesses some level of interest in confronting environmental issues. Graham developed a reputation for being outspoken against offshore drilling in the early 1990s. Reilly was a leader of the World Wildlife Fund and has the distinction of being the first head of the EPA to actually "come from a job in the environmental community."