Nuclear Experimentation: Year 76 was a year of tumult and entropy. It has been a year of introspection, a year in which personal and collective responsibility has been contemplated and realized. The status quo was shocked and shattered, and hopefully, people began to see the how their patterns playout, by ceasing them, and that those patterns that are unsustainable and impractical are addressed. The pandemics poor response could be used to postulate what might be the institutional ivory tower response of another a nuclear event. It would likely be poor as well.

In The Little Green Revolution I define Postmodernity as the era beginning when our waste products could no more be rid of without consequences, the era when the solution to pollution could not be dilution. In postmodernity began when there is only increased distribution of pollution, and its toxic consequences. The manipulation of elements into atomic components releases tremendous amounts of heat, radiation and total entropy, and after 76 years we are only now beginning to comprehend what must be endured, the increasing radiation levels and increasing use of finite resources toward reconciliation of nuclear experimentation, let alone maintenance.

The Covid-19 episode, let's hope it fades into history as an episode, demonstrates how faulty our collective capability to handle catastrophe actually is. Just as a virus knows no borders, radiation also knows no such limitations, and is thousands of times more detrimental to biology of humans, and all other plants and animals as well for inevitably longer periods of time. The scorched Earth of nuclear weaponry that would result from nuclear experimentation detonation is the same result as that of for nuclear power generation, only the scorching is not instantaneous and acute, but prolonged.

From what I can summarize and as far as we know The Fukushima catastrophe is the worst environmental disaster in world history, the meltdown and meltouts of the six reactor site are set to be ongoing for thousands of years into the Pacific Ocean and lifecycle of Earth. The Chernobyl meltdown continues to threaten European water table and The Hanford site continues to age and leak, threatening, ultimately, The West coast of The U.S.A. and The Americas.

What, me worry? Of course such would be a worse-case-scenarios"we are dependent on the ivory tower of institutions to maintain the nuclear experimentation and await solutions to problems that were ignored, like the perpetual heat and radiation of waste products and releases we are only beginning to reckon with like the ongoing Chernobyl, Hanford and Fukushima situations.

The threat of radiation is not as affronting as is a virus, or even daily hunger for that matter, for many, and yet nuclear experimentation is entirely dependent on the will of a collective to make certain it does not kill us all. Already the nuclear experiment has impacted the world in ways we are unable to calculate, being that the Pandora is out the box.

Let the Covid-19 episode, pray we can call it that, be a lesson to the collective. Yes, there will be other epidemics and pandemics and we should hope our institutions function in better course with more humanist ends in mind save the continuation of economic status quo when there is such. There will also be more reactor meltdowns, and possibly more meltouts. Any such nuclear experimentation radiation dispersal is global, is pandemic in its course, and worse it is total stratigraphic, a detriment to life, land and every atom in existence and atoms conducive to life as we know it, that will be, for thousands of years.

All nuclear experimentation radiation releases are global and total stratigraphic. In fact, take a sip, take a breath, or look at yourself in the mirror, residue from nuclear accidents and events are in you. If you managed to not succumb to Covid-19, you did not manage to save yourself from exposure to nuclear experimentation residue unless you were underground for the last 76 years. All radioactive releases are global, diluted by distance some, sure, but inevitably the legacy of the experiment is everywhere, and in everyone. 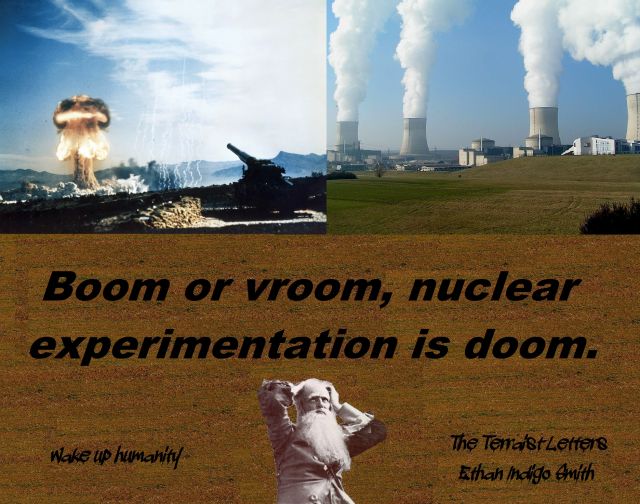 United States seeks to expand continued support of nuclear experimentation in order to make it appear economically sustainable and not a near limitless syphon of resources. Click Here