081018-N-9640W-001 American troops in Afghanistan
(Image by ResoluteSupportMedia from flickr)   Details   DMCA
The latest from Af-Pak front is confounding, to say the least. Pakistan wants the United States to go slow in meeting Biden's 9/11 deadline for withdrawal of its troops from Afghanistan. Prime Minister Imran Khan has gone on record to say that Islamabad has given up its decades-old policy of pushing for "strategic depth" in Kabul. He said he was against his country doing any 'manipulation' in Afghanistan "for the sake of peace". 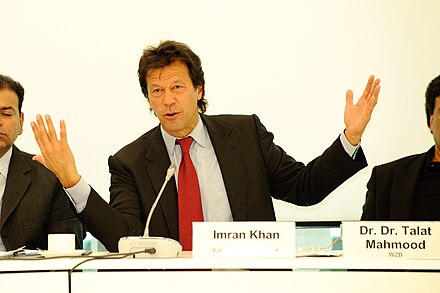 Konferenz Pakistan und der Westen - Imran Khan. Pakistan Prime Minister Imran Khan
(Image by Wikipedia (commons.wikimedia.org), Author: Stephan Röhl for Heinrich Böll Stiftung)   Details   Source   DMCA
Statements like these are hard to believe because of Pakistan's time-tested policy of deception and outright lies to cash in on the geo-strategic concerns of the US and China alike. Since Imran Khan is known as the 'selected' Prime Minister, the all-powerful military brass can be said to be on board his new plank.

The Taliban is handled by the GHQ. Also in public domain is the fact that the "Shura", which runs the Taliban show, is based in Quetta (hence known as Quetta Shura) as the guests of the Army's Inter-Services Intelligence (ISI). For Pakistan Army, the sine qua non for its adventurism on its eastern borders is a friendly regime in Kabul.

A former Afghan president, Hamid Karzai, has told a German publication that Pakistan is bent upon keeping India out of Afghanistan. When he was appointed Afghan president by US forces soon after the 9/11, Pakistan was jubilant. 'He is our man', a Pakistani newspaper declared. Karzai and his family had taken refuge in Pakistan when the Soviet Red Army marched into Kabul.

The Pakistanis were happy to see Karzai replaced by Ashraf Ghani, whom they thought would be favourably inclined towards Rawalpindi. Ghani did make some friendly overtures, and even went to the extent of calling on the Pakistani military chief on his first visit to the land of the pure as Pakistan styles itself. It did not take him long to be disillusioned with the patronage extended by Pakistan to Afghan terrorists. And Pakistan returned to its pastime of tirade against the Afghan President and his colleagues.

In a manner of speaking, the latest Imran-speak is exposing Pakistan's hypocrisy more since Pakistan has all along insisted on early end to American presence on Afghan soil. His national-security advisor, Moeed Yusuf, argues that a 'premature' withdrawal may create instability in Afghanistan. He does not want any post-withdrawal trouble to be linked to Pakistan, making it the 'scapegoat'. This is no more than an admission that the trouble-makers of Afghanistan Taliban are incubated and nurtured in his country just as revocation of 'strategic depth' policy means that Pakistan is very sure of Taliban's return to the driver's seat.

The Islamists being Islamists, the Afghan Taliban may fraternize with the likes of Lahore-based Lashkar-e-Toiba (LeT), which is an ISI creation primarily to needle India. This is a real danger given the "outsourcing deals" between terrorists on either side of the Durand Line. On its own part, the Afghan Taliban may not remain as obedient as Pakistan would expect.

Yet, going by Imran-speak and Moeed-rhetoric, Islamabad believes it can deal with that kind of situation because the Afghan Taliban cannot be totally free of ISI stranglehold.

After the new 9/11, a sense of triumphalism will come over the Afghan Taliban. Pakistan will rejoice as its chief patron and protector. This will certainly lead to revival of export of terror and an adverse impact on US interests.

In that eventuality, the US public opinion and its politicians would expect the White House to do what it had refrained from doing for two decades: Declare Pakistan a terror-sponsoring state. And abandon Pakistan like it did after the Soviet Union's retreat that provided an opportunity for Taliban to take control of Kabul.

As Michael Rubin of the American Enterprise Institute says, Pakistan is not oblivious of such a possibility. Imran Khan's no-strategic-depth assurance is designed to ward off that danger.

Pakistan has all along played a game of deception on Taliban. First, it went on denying for years that it had no relations with the "thugs" of Afghanistan. When it began to appear that the US is getting tired of the Afghan war and would like to call back its troops, Pakistan began to throw clear hints that it was, indeed, in a position to bring the Afghan Taliban to the negotiating table. President Trump was delighted. So did his successor, Joe Biden. And the Doha talks got under way without much ado.

The so-called Doha peace agreement appears flawed from the start. Firstly, because the Taliban wants total withdrawal of all foreign troops, and secondly because they refuse to recognize or talk to the elected Afghan government. In other words, the Taliban is signaling that the moment the US bows out, it shall take over Afghanistan. That kind of prospect has horrified most Afghans and the whole world, save Pakistan and its Taliban handlers in the ISI.

The US knows full well about the nature of relations between the Taliban and the ISI and the leverage the ISI has over the Taliban, who want to usher in the medieval Caliphate in Afghanistan and beyond. Yet Washington is unwilling to look beyond the immediate in dealing with Pakistan. It is because of the latter's potential to sabotage Biden's 9/11 plan. The geo-strategic location of Pakistan at the southern tip of Central Asia is another deterrent for the US in chastising Pakistan fully.

The situation may well change in the days ahead as President Biden is reinventing the American wheel in the post-Trump world. And in matters security, like in politics, there is an X-factor, Americans will be loathe to ignore, well, to the dismay of Pakistanis and their Afghan props.