(Image by KLCS)   Details   DMCA
As the Vice-President of the LAUSD School Board, Nick Melvoin constantly reminded the minority members of their status and how if they wanted a say they would need to win elections. This majority pushed through the hiring of Superintendent Austin Beutner without bothering to build consensusand asked the district attorney to investigate Scott Schmerelson when in an act that promoted transparency he dared to tell the publicabout what went on behind the scenes during the hiring process.

With the conviction of Ref Rodriguezand the election of Jackie Goldbergto replace him, Melvoin's block has lost its majority status. Now, the lawyer from the West Side is singing a different tune. Apparently, policies should no longer be dictated by the majority. Instead, we should have "collaboration."

Melvoin sits on the LAUSD Board because supporters of the California Charter School Association (CCSA) spent millions on a dirty campaign against former Board President Steve Zimmer. This race wasn't based on policy. Instead, the charter school industry was not happy that the former Board President would not look the other way when the schools it represents broke the rulesand the industry was willing to destroy a good man to win total victory.

Melvoin was silent after his ally Rodriguez was indicted for election fraudand never called for his resignation. After Rodriguez was convicted and forced from office, Melvoin and his supporters actively worked to keep the residents of LAUSD Board District 5 unrepresented for over a year. When Jackie Goldberg was put forwardas a temporary replacement until a special election could be held, Speak Up, an organization that grew out of Melvoin's campaign, engaged in open bigotryto block her appointment. At no time did Melvoin ever put forth another candidate to become a caretaker for the seat.

In the waning days of his majority, Melvoin's office became an extension of the CCSA. At the behest of his handlers in the charter school industry, he pushed through the School Performance Framework as a way for these private schools to gain control of public facilities. He directly fed the CCSA confidential information from the LAUSD's lawyer about a lawsuitbetween the two parties. The charter schools were allowed to write the rulesthat would govern how they would operate. His secret committeeattempted to limit the abilityof members of the public to advocate before the board.

With this history, Melvoin's calls for "collaboration" ring hollow. If he really believed in the concept of working together to find common solutions, he should have pushed for it when he helped lead the majority. But he did not. For him to do so now, as calls intensify for an investigationinto his actions as a board member, Melvoin comes across as a man desperate to hold on to relevance. 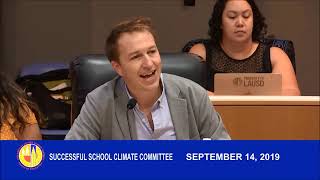 Now in the minority, Nick Melvoin seeks collaboration In the majority, LAUSD Board Members supporting charter schools had little respect for the minority. With the roles switched, Nick Melvoin demands ...
(Image by YouTube, Channel: Carl Petersen)   Details   DMCA
Carl Petersen is a parent, an advocate for students with special education needs, an elected member of the Northridge East Neighborhood Counciland was a Green Party candidate in LAUSD's District 2 School Board race. During the campaign, he was endorsed by the Network for Public Education (NPE) Action and Dr. Diane Ravitch called him a "strong supporter of public schools." His past blogs can be found at www.ChangeTheLAUSD.com. Opinions are his own.