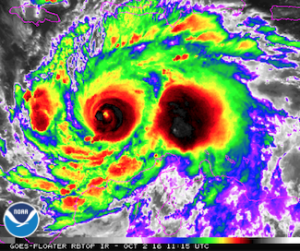 Florida Gov. Rick Scott has been busy warning millions of people for days now to evacuate their homes, with good reason.

But what he won't say, and he won't let any state employee say, is that the sheer power of this storm is directly related to climate change and the effects of a warming planet.

And to put it simply, now, every storm is a climate change storm.

Matthew shocked storm-watchers last week when it gained energy and grew from a tropical storm to a Category 5 hurricane so quickly that it shattered records.

On Tuesday, Matthew weakened into a Category 4 storm and slammed Haiti, and even though the storm had weakened, Climate Signals nonetheless reports that it's the most powerful storm to hit Haiti in a generation.

As it makes landfall in Florida, Matthew has also broken the record for the longest lived hurricane of its strength in the eastern Caribbean, and it's only hurricane on record to have ever made landfall north of Miami along the East coast of Florida in October.

But thanks to climate change, storms like Matthew are becoming more and more severe.

As Seth Borenstein wrote at Phys.org recently, Hurricane Matthew is "wet, wild and weird," which is also a great way to describe the planet's climate now that we're clearly seeing the effects of global warming and climate change.

The Atlantic's hurricane season officially runs from June 1 to November 30, but the statistical peak is September 10, when ocean temperatures are high and wind shear is low.

That's changed now, and climate scientist James Hansen recently published a paper showing that Earth's global temperature right now is comparable only to a time 115,000 years ago, when that warming pushed the sea level up 20 to 30 feet higher than it is today.

And as human activity has warmed the planet, scientists at the Lawrence Livermore National Laboratory point out that the oceans have dramatically warmed over the last century because "the ocean absorbs more than 90 percent of the Earth's excess heat increase that is associated with global warming. The observed ocean and atmosphere warming is a result of continuing greenhouse gas emissions."

Climate scientist Michael Mann told The Huffington Post that, "The nearly unprecedented rapid intensification we saw with this storm is favored by warmer oceans and greater ocean heat content."

Related Topic(s): Climate Change; Climate Change Deniers; Hurricanes, Add Tags
Add to My Group(s)
Go To Commenting
The views expressed herein are the sole responsibility of the author and do not necessarily reflect those of this website or its editors.