The prize, sponsored by Israeli Ministry of Education, comes just days after new Israeli Education Minister called for permanent Apartheid regime with "no political-level voting rights" for Palestinians . Funded by the State, the settlers are the hard core of a new brand of Judaism, which is characterized by racist, militant, violent, and at times murderous tendencies. Now they are perceived as a growing threat to the government itself as well... 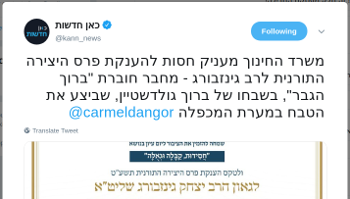 Yitzchak Ginsburgh and Kann, Israeli government broadcasting, announcement: "Ministry of Education is sponsoring the Jewish scholarship prize for Rabbi Ginsburgh - author of "Baruch Hagever", in praise of Baruch Goldstein, who perpetrated the Cave of the Patriarchs massacre."

Tel-Aviv, July 16 - "Rabbi" Yitzchak Ginsburgh had been announced today winner of a Jewish scholarship prize, sponsored by the Ministry of Education. The announcement comes just days after the controversy, surrounding comments by new orthodox Jewish Minister of Education, "Rabbi" Rafi Peretz, advocating permanent, legal Apartheid in Palestine and "conversion therapy" for gays. [i]

The announcement, like Ginsburgh 's work in general, has met mixed appraisals:

Ginsburgh writes a regular blog in the Times of Israel: [ii, iii]

...born in S. Louis, Missouri in 1944... pursued an academic career in mathematics and philosophy, later studying Torah under the guidance of several great sages- most notably, the Lubavitcher Rebbe. Rabbi Ginsburgh made Aliyah to Israel in 1965. Author of over 120 books, Rabbi Ginsburgh lectures throughout Israel on Tora.

Elsewhere , Ginsburgh is praised in a Jewish orthodox site for his Kabbalah scholarship : [iv]

... our generation's most respected authority on Jewish Mysticism.

Ginsburg is closely affiliated with the Chabad brand of Judaism, which often appears benignant, runs worldwide operations, and enjoys a semi-official status in Israel and elsewhere. [v]

Mainstream Israeli media noted that the prize winner is also the author of a 1995 book " in memory of the holy Dr Baruch Goldstein, may god revenge his blood ", [vi,vii] who perpetrated the 1994 Cave of the Patriarchs massacre in which 29 people were killed, several as young as twelve, and 125 wounded. [viii] The massacre is cherished by Jewish settlers, since it irreversibly changed life in Hebron, the 2nd largest Palestinian city. The massacre paradoxically led to harsh retaliation by the Israeli authorities against the Palestinians, starting with several weeks long house curfew of the entire population, and ending with permanent exclusion of Palestinians from what used to be the city's commercial center. Hebron today is perhaps the best examples of the application of Apartheid in Palestine. [ix]

In 2010, Ginsburg gave his support and lent his authority to the radical Jewish publication "King's Torah", which was deemed by many a call for terror and war crimes against Arabs, and was the subject of petition to the Israeli Supreme Court, demanding criminal indictments. [xii, xiii]

Such publications also give the Jewish religious justification for establishing Apartheid in Palestine. [xiv]

His work won appreciation in Israel and abroad: * Prof Uzzi Ornan - "All power to you! I hope that you see your tremendous efforts (more...)
Related Topic(s): Judaism Jewish, Add Tags
Add to My Group(s)
Go To Commenting
The views expressed herein are the sole responsibility of the author and do not necessarily reflect those of this website or its editors.