Nearly everyone is familiar with elections and voting and many seem to be interested in making improvements in how we vote. But few are schooled in this topic and only a very few are conversant with all of the technical jargon that specialists in the topic use. In these articles I have tried to write for the widest possible audience, avoiding technical notation and jargon to the extent that clarity permits. 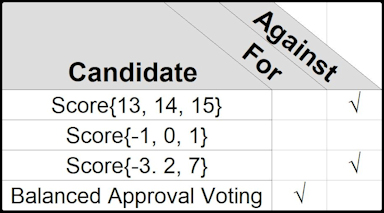 Comments in the previous article urged me to stick to standard technical jargon and to use the name Score{-1, 0, 1} or perversely even Score{13, 14, 15} for the system that I have chosen to call Balanced Approval Voting. This notation is familiar to specialists and for them it provides a nice short-hand for discussing and contrasting members of this particular community of voting systems. But the audience I wanted to reach was much larger than this and this notation shed no particular light on what I wanted to say; indeed, for most readers it would offer much more fog than light. And I would hate to open myself to criticism by such a distinguished philosopher as Ralph Waldo Emerson.

Still, the topic has been raised and although it involves straying a bit from the writing style I've tried to follow, I do feel that this notation scheme does need some illumination.

The notation, Score{1, 2, 3}, gives a name for the voting system in which voters are asked to assign just one of these three specific numbers to each candidate, with the understanding that larger number expresses greater support. The numbers a voter assigns are added for each candidate to get the tally for that candidate and the candidate with the largest tally wins the election. The often unstated and frequently unnoticed requirement is that all voters must follow these instructions to the letter.

In a technical discussion among experts, this kind of simplifying assumption is not uncommon nor a particular problem; readers understand that simplifying assumptions are common and that they should rely accurately on the definitions that writers (should feel obligated to) provide for them. But in the real world if this exact system were used in an election, some voters would surely fail to do as instructed. Usually this would be a failure to assign any number at all to a candidate. And this forces us to specify how to tally those ballots that lack an assigned number, in this case either 1, 2 or 3? You could disqualify the entire ballot, but that might well trigger voter objections and even protests. Alternatively, you could choose a default value from among 1, 2 or 3 and treat the ballot as if the candidate had assigned the default value. And that would probably be a better alternative.

It might seem an attractive alternative to just skip over any ballot that fails to specify one of the three values when tallying for a candidate and no doubt many voters would expect this is what would be done. That may seem a good way to handle the problem but but it simply would not work; it would amount to assigning a default value of 0, effectively converting Score{1, 2, 3} into Score{0, 1, 2, 3}. In the same way, for another example, Score{-1, 1} would quite naturally transform into Score{-1, 0, +1}.

If the Score{} style of notation is used to guide the implementing of a voting system for a real election it seems advisable to include 0 as one of the available scores and to declare that as the default value to use when a voter does not specify what to assign. But fortunately there is a simple approach for avoiding these difficulties entirely.

As an example, let us look at a particularly simple special case, Score{0, 1}. This is a possible name for the system, but most people, even specialists in voting theory, are in the habit of calling this particular system, Approval Voting. You might also describe the same system as Score{17, 35} or perhaps Score{-1, 1}. But aside from just wanting to make that very point, that these are different but similar systems, why would anyone choose something other than Score{0, 1}? These systems are the same (in the sense of who would win election) but Score{0, 1} would produce a tally, for each candidate, is exactly the number of voters who assign 1 {support} to that candidate, something none of these other systems would do.

As a bonus, with this particular choice of scores, to take the tally it is only necessary to count, for each candidate, the number of ballots that indicate support for that candidate. By taking advantage of this fact, Approval Voting is even more simply and clearly described as follows:

The ballots show a checkbox next to each candidate's name and voters simply check the boxes next to any and all candidates they choose to support. The candidate with the largest number of supporting votes wins the election.

But for another example, consider the system Score{-1, 0, 1}. As with Approval voting, we could choose some other values than these three for which the choice of a winner could be unchanged, but the actual tallies would differ and be something other than the net vote. The counting would be more difficult and the resulting tally would not be as meaningful, but you could do in such a confusing way if your only concern were for determining the election result.

Just as Approval Voting is given another name for Score{0, 1}, we avail ourselves the convenience of referring to Score{-1, 0, 1} as Balanced Approval Voting. As with Approval Voting, and for the same reasons, a real-world election would best avoid asking voters to assign numbers at all. In tallying ballots we would count the number of voters who checked the support box next to each candidate's name and separately count the number of voters who checked the oppose box. Subsequently we would compute the net vote for each candidate by subtracting the oppose count from the support count for that candidate. The winner would be the candidate determined to garner the largest net vote.

A concerned citizen and former mathematician/engineer now retired and living in rural Maine.
Related Topic(s): Approval; Voting Integrity; Voting Laws State; Voting Methods; Voting Reform; Voting Results, Add Tags
Add to My Group(s)
Go To Commenting
The views expressed herein are the sole responsibility of the author and do not necessarily reflect those of this website or its editors.