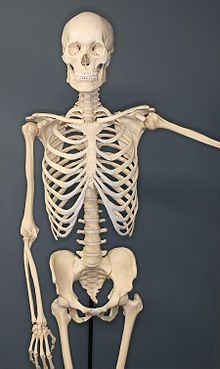 Almost exactly two years ago, I was accosted, assaulted and battered by a white man. This individual was about 15, or so, years my senior. The assault, his seniority notwithstanding, got to a point where I had to terminate it, and I did so reluctantly, swiftly and in as controlled a manner that such a situation would warrant. This occurred shortly after President Trump was inaugurated.

Ultimately, there was a two day trial in which I was in propia persona. During my cross examination of the assailant, in which he was totally impeached though represented by an allegedly high powered attorney, I asked him did he utter a racial epitaph to me during the aforementioned incident. His response was "absolutely not! I don't have a racist bone in my body".

Exactly what is a "racist bone"? And why is it that only white people have them? Are there other bones that similar comparisons are made to? You know: I don't have a democratic bone, I don't have a taco bone, I don't have a Buick bone, I don't have a republican bone...you get my drift, most certainly. The presiding judge (Reichert) in the matter to which I previously reference, a staunch conservative and the essence of imperturbable judicial temperament, even raised an ever so slight eyebrow at the comment. I won the case, though justice has yet to be served. It was a grueling ordeal that I will never forget.

Presidential candidate Joseph Biden, pursuant to recent questions raised about his affiliation with rabid racists with whom he has commiserated in the past, responded by stating "there's not a racist bone in my body." Apparently, Mr. Biden is ignorant to the fact that such a statement is almost always interpreted as a sign of culpability; especially by Black People in America and at least one white judge. I often wonder do white people realize that when they make these trite utterances that they are confirming what they are unqualified to deny.

My best friend is Black (my seminal favorite).

My Black Buddy Barak, Triple B; not to be confused with the Better Business Bureau.

But Barak has yet to bless Biden's bid for taking us back.

A few days ago, I explored, the similarities in Biden and Trump. Quite a few people took offense to my perspective, though it is rarely my primary intent to offend anyone. Sometimes offense is a by-product of the truth and its resultant reality. Decades after Biden chaired the Clarence 'Uncle' Thomas hearings, he suddenly apologized for the way the hearings were conducted pertinent to the disrespect of a Black woman; just before he decides to announce his candidacy for the 2020 presidential election. He politically slummed/slums around with the likes of Strom Thurmond, James Eastland and Herman Talmadge. In his 1993 speech on the senate floor supporting the looming crime bill Biden spoke of "predators on our streets" who were "beyond the pale" (how pale are they Uncle Joe?). Reminds me of Clinton's "super-predators". And, last but hardly least, is the first articulate and bright and clean African American Biden has ever seen: his Black Buddy Barak. https://www.opednews.com/articles/Biden-v-Trump-A-Distincti-by-Rohn-Kenyatta-Abortion_America_Choice_Death-Civilians-190610-959.html

I, as a Black Person in America, intend to support the people that appear to have my interests at heart. Only Black People in America are asked to support candidates that routinely insult them. I scoff at such slave mentality; on both sides. Because after you come to my church (if I go to church) lip-syncing and clapping unsteadily whilst negroid spirituals ring out and you seduce me into giving you my, probably, compromised vote I'll never see you again. After you tell me about hot sauce in your purse, I'll never see you again. After you 'relate' to me about "put y'all back in chains", you will return to the gated confines of Sleepy Hollow, U.S.A., and I'll never see you again.

Just leave the money on the nightstand.

There is much ado about nothing in terms of "reparations" (which I most definitely intend to address). The sudden, and soon to be dead, 'conversation' about "reparations" is yet another example of Black people in America being used as political tools. There can be no reparations until attitudes are transformed; a moribund mission. Whenever I hear any white person assess the racism of another white person, it makes me fairly nauseous. I have heard countless white people state that Donald Trump "is not a racist". What level of hubris allows an individual to assess something that they are both perpetrators and architects of but never subordinated to? Only incredible arrogance would allow such intellectual folly.

In any event, as far as Black People in America are concerned the issue in not "racism". Oh no, it is something that has no name, and it has no name for a reason, but we know what it is.

As long as white people have the attitude, and resultant arrogance, that they are somehow qualified to define the terms of something that they are not subjected to, nothing changes. The United States will come to the social and moral reconciliation that it must, eventually, make with its only citizens forced to come to its shores. The only citizens who, to this very day, carry the names of those that kidnapped, raped, murdered and enslaved them. The only ones that, when they hear those hallowed words "all men are created equal", know it meant everyone but them. The only ones that understand when they hear a politician say 'we are a nation of immigrants' it is a reminder of their exclusion in this society, and their secondary status. The only American citizens who have no idea what country (not continent) they came from or what languages they spoke. We have the unique, yet dubious, distinction of being the only citizens in the history of the modern world deemed, by law, to be non-human; property, in fact.

Related Topic(s): Election; Hearings; People; Politics; Predator; Racism; Racist Depopulation; Reality; Reality; Reconciliation; (more...) Reparation; Republican; Satire; Speech; State, Add Tags  (less...)
Add to My Group(s)
Go To Commenting
The views expressed herein are the sole responsibility of the author and do not necessarily reflect those of this website or its editors.