The now infamous phrase points to how the Trump administration has embraced a cruel, cynical, nihilistic worldview rooted in nothing but the quest to obtain and maintain power in the service of personal gain 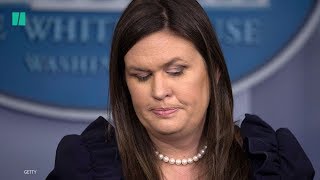 At Politico's "Women Rule" event in late 2018, Sarah Huckabee Sanders, who President Trump announced Thursday would soon be leaving her position as White House press secretary, said that she hoped her legacy would be as a person who was, "transparent and honest throughout that process" and did "everything I could to make America a little better that day than it was the day before."

Of course, given the sheer volume and magnitude of lies Sanders and her boss have inflicted on the U.S. population over the years, it's hard now not to laugh at these words. Most recently, Sanders claimed that she had heard from "countless"individuals who work at the FBI who said they were very happy" with the firing of James Comey. It should go without saying that Sanders simply made that up. When offering testimony under oath to the Mueller investigation, Sanders openly admitted that her statement "was not founded on anything."

The phrase "Not Founded On Anything" points to the role of Sanders in the embrace of a cruel, cynical, nihilistic worldview rooted in nothing but the quest to obtain and maintain power in the service of personal gain. (After all, this is a person who even lied about the death of migrant children at the U.S. border.) I previously described this Trumpite worldview as "corrosive dystopianism" which encourages "the rejection and destruction of the very structures in society that can, if reformed properly, be agents for positive change." Journalists? The state? Universities? Courts? Science? Immigrants? The FBI? All pitched as obstacles in the way of so-called "patriots" searching for their piece of the American Dream. If we have to lie to crush those institutions, well, that's the rather counter-intuitive price of freedom.

In essence, Sanders embraced a scorched earth strategy wherein a quite shameless effort to defend Trump -- she would gladly sacrifice core elements of democratic society, such as a free press.

Make no mistake, this strategy was not a glitch or bug in the Trumpite operating system. It was -- and remains -- a feature of that system. Sanders was not simply doing her best at an "impossible job," as New York Times columnist Nicholas Kristof tweeted. On the contrary, Sanders was doing precisely the job that she was asked, and loved, to do: lie, attack, deflect and question the very nature of reality, and undermine anyone or anything that threatened the power of the privileged.

And, let's not lose sight of the irony of conservatives who endlessly pontificate about the evils of "liberal, postmodern" university classes where the "nature of reality" is questioned gleefully falling into lock-step behind an administration that has done nothing but question fact, truth, and reality.

So farewell, Sarah Huckabee Sanders. Your tenure was indeed "Not Founded on Anything." And that's one of the most dangerous foundations imaginable.

commondreams.org is a progressive publisher
Related Topic(s): Farewell; Lies; Sarah Huckabee Sanders Liar; Trump, Add Tags
Add to My Group(s)
Go To Commenting
The views expressed herein are the sole responsibility of the author and do not necessarily reflect those of this website or its editors.