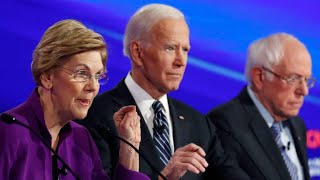 The dismal conflict that erupted this week between Bernie Sanders and Elizabeth Warren should never have happened. But now that it has, supporters must provide grassroots leadership to mitigate the dangerous mess.

The argument that broke out between Warren and Sanders last weekend and escalated in recent days is already history that threatens to foreshadow tragedy. Progressives cannot afford to give any more aid and comfort to the forces behind corporate contenders Joe Biden and Pete Buttigieg, or the plutocratic $54-billion-man Michael Bloomberg waiting in the wings.

In a sense, this moment calls for Sanders and Warren supporters to be better than their candidates, who've descended into an avoidably harsh conflict that hugely benefits corporate power and corporate Democrats and will do so even more to the extent that it doesn't subside.

So much is at stake that Sanders and Warren must be called upon to look beyond their own anger, no matter how justified. A demolition derby between the two or their supporters won't resolve who's right. But it will help the right wing.

No matter how decent, candidates and their campaigns make mistakes, for a range of reasons. The Sanders campaign made one when its talking points for volunteers in Iowa included saying that Warren "is bringing no new bases into the Democratic Party." It was a breach of a de facto nonaggression pact between the two campaigns a tactical and political error, setting off retaliation from Warren that quickly became asymmetrical.

Warren responded by publicly saying on Sunday: "I was disappointed to hear that Bernie is sending his volunteers out to trash me."

The clash could have de-escalated at that point, and for a short time it seemed that it might. But then came the anonymously sourced CNN story that Sanders had told Warren at a December 2018 private meeting that a woman couldn't be elected president. Sanders quickly and categorically denied saying that.

It should have ended there. Warren could have simply said that it was a private meeting and there may have been a misunderstanding. Instead she threw a political grenade at Sanders, stating that he had said a woman could not be elected president.

And then, whether or not she knew that microphones would pick up her words, Warren further escalated the conflict after the debate Tuesday night by walking over to Sanders, refusing to shake his hand (moments after shaking Biden's hand) and saying: "I think you called me a liar on national TV."

When CNN, predictably, released the audio on Wednesday night, the situation blew up worse than ever.

As an active Sanders supporter, I had been heartened by the nonaggression pact and frequent mutual support on many substantive issues between Warren and Sanders. While I'm much more aligned with Bernie's political worldview, I have held Warren in high regard. Not so high now.

But here's the overarching point: Whatever Sanders and Warren supporters think of each other's candidate now, there is no plausible pathway forward to the 2020 presidential nomination for either if the conflict festers.

Lost in a volcano of anger from many Bernie supporters is the reality that a tactical coalition with Warren is vital for blocking the nomination of the likes of Biden, Buttigieg and Bloomberg. That's why BBB are surely elated at what has happened between Warren and Sanders in recent days and why BBB surely hope that a lot of Sanders supporters declare political war on Warren and vice versa. The sounds of that clash in the weeks ahead would be music to the ears of corporate Democrats.

Related Topic(s): Argument; Bernie Sanders 2020 Presidential Candidate; Bernie Supporters; Conflict; Dangerous; Progressives; Supporters; Warren-Elizabeth, Add Tags
Add to My Group(s)
Go To Commenting
The views expressed herein are the sole responsibility of the author and do not necessarily reflect those of this website or its editors.