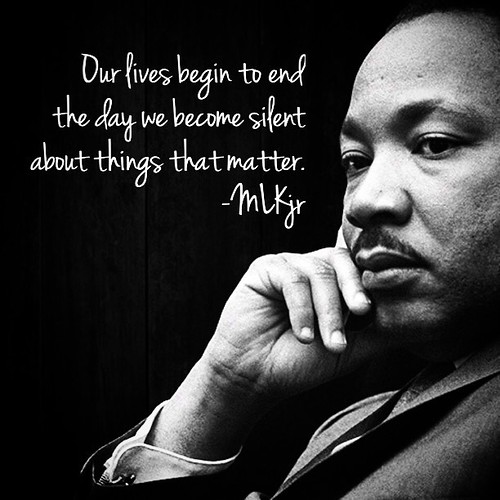 Our lives begin to end the day we become silent about things that matter. #MLKjr Owner: darinrmcclure at flickr.com/people/32604470@N08/ License: Attribution
(Image by darinrmcclure)   Details   DMCA

Since prominently placed statues of famous racists are no longer acceptable, just as policemen shooting African Americans has finally become unacceptable, why not dispense with the far out illusion of a racist colonial capitalist USA being worth celebrating.

Let's face the truthful implications of riding ourselves of the public relation lies that made known racists Winston Churchill and Woodrow Wilson deserving of public hero worship. Since they were really bastards in their behavior, does it not follow that their administrations were less than deserving of some patriotic belief in their nations greatness? Would not the truth about our criminally racist colonial capitalist wars make us free of dangerous self-deceptions about the nature of our lives and our own integrity? Compare our natural healthy love of life and each other with the ignominiously false aspects of our being criminally ruled by a racist genocide-for-capital accumulation speculative investment banking oligarchy?

Already five years ago Minority Perspective in Birmingham, UK questioned celebrating the birth of such a murderously racist nation by publishing on July 4, 1916:

Synopsis: Independence Holiday in the USA becomes a time when citizens tend to reflect on the nations two hundred forty year history. It is a history typical of the bloody British Empire and other six European empires in the areas of genocide and plunder. Readers wishing to review crimes against humanity perpetrated by citizens in military uniform of the nation born on the fourth of July, 1776, may click on the above title.

Apropos to the present success of the ongoing protests making the taking of black American lives in the streets and homes of the United States of America matter to USA's ruling white establishment, also five years ago, in Kerala India, publishers of Counter Currents in their awareness of the continuing non-mattering of Black Lives taken in their own beloved countries all around the world by invading Americans GIs, saw fit to publish:

Synopsis: Unless Martin Luther King is wrong, the movement to protect US Blacks from White people will go nowhere while Black American soldiers follow illegal orders to kill Africans in Africa and other non-Caucasian people all around the globe. King assured everyone listening, 'there will be no progress on social justice issues at home while we go on killing the poor overseas at a such an enormous expenditure of social and financial resources that make such progress impossible.'

Related Topic(s): Black Lives Matter; Cultural Genocide; Financial Genocide; Genocide; July 4th; Racism, Add Tags
Add to My Group(s)
Go To Commenting
The views expressed herein are the sole responsibility of the author and do not necessarily reflect those of this website or its editors.