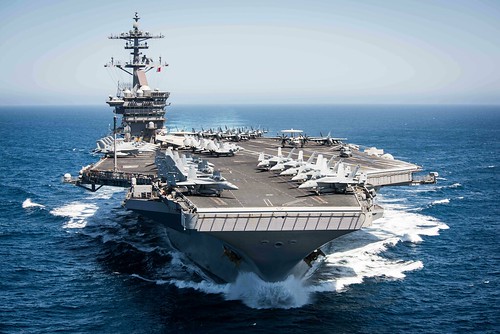 The Democratic People's Republic of Korea (i.e. North Korea) cannot trust the United States of America. The US does not keep its promises, honor its treaties and obey international laws. This is not opinion; it is the history of the US, beginning with the many broken promises and treaties with the Native Americans.

The US has broken promises and treaties in every corner of the globe. The US ignores the UN Charter, which is a treaty. It flouts international law, which is based on treaties. The US habitually starts asymmetrical wars, which is aggression and the worst of all war crimes. It destroys nations, leaving millions of people dead, dying, and in misery.

Libya was once a prosperous nation. Muammar Gaddafi was an eccentric dictator, but he had a love for Libya and its people. Under Gaddafi the people enjoyed a high standard of living, economic freedom, and gender equality. Education and medical care were free. Having a home and food was considered a human right. Libya's oil wealth benefited the people.

Gaddafi was attacked and vilified by the US for decades. After the attacks on the US of September 11, 2001, Gaddafi cooperated with the US in the War on Terror. That is not to say that the War on Terror was a good thing, but Gaddafi was being US-friendly. In further efforts to establish friendly relations with the US, Gaddafi denuclearized in 2003. President George W. Bush praised Libya for denuclearizing and suggested Libya as a model for North Korea. In 2011 President Obama wantonly destroyed Libya and conspired in Gaddafi's assassination. Obama's Secretary of State gloated afterwards "we came, we saw, he died" ha,ha,ha".

Even if North Korea completely and forever denuclearizes Kim Jong-un can never be assured that one day the US won't try to do the same thing to North Korea that it did to Libya. North Korea can never put its trust in the US, because the US has proved itself untrustworthy over and over again.

Iraq did not have a nuclear weapons program since the early 1990s. After the First Gulf War in 1991, Saddam Hussein cooperated with the United Nations and the International Atomic Energy Agency (IAEA) inspectors right up until the US invasion in 2003. The weapons inspectors advised against the invasion and recommended that the inspections be continued. President George W. Bush invaded anyway based on known lies that Saddam Hussein had a nuclear-weapons program. After the invasion and destruction of Iraq, 1625 weapons inspectors spent the next 2 years searching Iraq and found no weapons of mass destruction.

The US continues to accuse Iran of having a nuclear-weapons program even though the IAEA certifies that it doesn't, and all 16 US intelligence agencies have said that Iran has not had an active nuclear-weapons program since 2003. Facts do not matter to the US. It creates its own reality. Based on its own unreality, the US can invent any reason it wants to impose sanctions and invade asymmetrical countries.

Iraq denuclearized, Libya denuclearized and Iran denuclearized. The US invaded Iraq based on the unreality of the existence of nuclear weapons. Libya was invaded based on the invented unreality that the invasion was for human rights. The US has imposed sanctions on Venezuela because it does not consider it "democratic enough". The US has imposed sanction against Russia because of its alleged invasion of Ukraine, after a US-instigated putsch.

If North Korea completely denuclearizes and the US removes all economic sanctions, there is no way to guarantee that some future US president won't accuse North Korea of secretly harboring a nuclear program. Or the US can invent a false flag event or use a "red-herring" to impose economic sanctions. A red-herring is an issue that distracts from the real issue.

Economic sanctions are financial weapons of mass destruction that kill hundreds of thousands of people. The US can always find a red-herring excuse for imposing sanctions, as it has with Venezuela. With Venezuela the real issue is not democracy. Venezuela has regular elections, while the USA backs many dictators and absolute monarchs all over the world. The real issue is that Venezuela nationalized its oil wealth to benefit its own people, costing Exxon and other US oil corporations billions of dollars in profits.

Human rights in North Korea is a red-herring, which the US propaganda mills keep grinding out. North Korean defectors are paid a reward up to $860,000 depending on their intelligence and propaganda value. Tales of North Korean human-rights abuses are not based on facts, but are rumors based on rumors and propaganda. The US does not care about human rights. The only thing the US foreign policy cares about is its empire and taking care of US corporate interests around the world. Otherwise the US would do something about Saudi Arabia's human-rights abuses.

Saudi Arabia is an absolute monarchy and the most brutal regime in the world. The US is an accomplice to Saudi Arabia's genocidal bombing and blockade of Yemen, which is starving millions of civilians. Saudi Arabia beheads or crucifies over 100 prisoners every year. One never hears a peep out of the US State Department about human rights in Saudi Arabia.

The US never squawks about human rights in Columbia, Egypt, Honduras, Israel, Rwanda, Turkey, Ukraine, or its own atrocious human-rights record. The US has 5% of the world's population and 25% of the world's prisoners; yet it constantly harps about North Korea allegedly having a "gulag of 200,000 political prisoners".

The US has made a political issue of the tragic death of Otto Warmbier, yet the Hamilton County, Ohio coroner report says it found no evidence that he was tortured while a prisoner in North Korea. The US is using his death for propaganda, and not because it cares about an individual life.

Related Topic(s): Korea; Korean Unification; Korean War; North Korea; North Korea And South Korea Talks; Propaganda, Add Tags
Add to My Group(s)
Go To Commenting
The views expressed herein are the sole responsibility of the author and do not necessarily reflect those of this website or its editors.