Have you noticed how easily people fall into passionate disagreement over points that matter far less than the heat they generate might suggest? I see it all the time. Last week my blog shared ideas and observations en route to speaking at the Women's International Study Center's inaugural symposium. The Symposium was excellent. Everyone was so smart, thoughtful, and articulate, I thought the building might levitate. But even with that much brainpower in the room, two points of this kind impressed me.

Are women better? Some speakers suggested that equal rights for women were justified by the differences women would make: that surely, women would bring different values and energies to workplaces, institutions, and the halls of power, and that would be a great improvement for everyone. These differences often turn on conventional gender types: women would be more collaborative, less belligerent. They would bring a softness and kindness. They would value relationships more and competition less.

If you believe in this equation, and actual existing women--once admitted to the offices and board rooms they were previously denied--turn out not to behave as hoped, you may begin to question the value of working so hard for equal access and equal rights. If women aren't necessarily going to make things better--or even if they share with men a susceptibility to the abuse of power if they happen to acquire more than an average share of it--why should you fight for their rights?

Because human rights are not earned. They are not contingent on merit or any other quality or condition. Human rights, by definition, must be conferred equally on every human merely for existing. If they are not--as we are seeing so clearly in Ferguson, MO--they are not rights, but privileges.

If women have to earn equal rights by demonstrating superior merit, then men have to earn them too. If every advantage and privilege that a man now possesses by virtue of his gender is to become merit-based, get ready for a lo-o-o-o-ng vetting process. The Bureau of Just Desserts is going to need a lot more interviewers and clipboards. 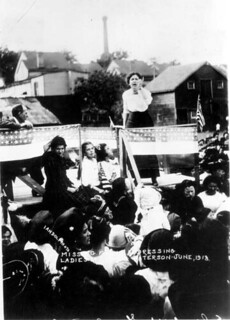 Are women's and men's brains different? One of my fellow conference speakers, Jennifer Raymond, an articulate and accomplished neuroscientist (and Associate Dean in the Office of Diversity and Leadership at Stanford's medical school), was repeatedly asked this question. The askers had observed behavioral differences they felt could only be explained by recourse to biology. If male and female brains aren't wired differently, why does my three year-old son, who has always been denied guns and television, run around the back yard pointing a carrot at his sister and making pow-pow noises? Why does my daughter, who has been taught from the earliest age that girls can do anything, think that soldiers or doctors or presidents have to be boys?

Raymond pointed out two things: first, that scientific knowledge of the brain is not yet sufficient to say whether or not there are physical differences, whether the brain's wiring is gendered. And second, that unless we are able to remove all gender-based social inputs from a child's experience--not just TV, but cues that come from playmates and caregivers and the passing scene--we cannot know whether playing shoot-em-up with a carrot is anything other than a sign of cultural socialization.

But here's my question: so what if the brain turns out to be gendered? Do those who search for brain differences imagine that specific, concrete variations in behavior, policy, or social opportunity will automatically follow from them? If so, they will be disappointed. Unless that perhaps to-be-discovered organic difference comes with an owner's manual, its meaning will remain wide open to interpretation.

And that undeniable truth must lead to precisely the same conclusion as the opposite finding, that there are no organic differences in male and female brains. It is incumbent on society to offer exactly the same range of opportunity and liberty--the same unfettered human rights--to men and women, because only absolute social equality will allow individuals and communities the full scope of possibility which is our birthright (however often it has been denied).

Try to imagine the conversation about equality if we stopped wasting time on palpably false assumptions--for example, that women have to earn equal rights--and pointless arguments such as whether whether men's and women's brains are wired differently. Think of all the time we would have for debates that can actually make a difference in the world!

Arlene Goldbard is a writer, speaker, social activist, and consultant who works for justice, compassion and honor in every sphere, from the interpersonal to the transnational. She is known for her provocative, independent voice and her ability to (more...)
Related Topic(s): Feminism; Feminism; Gender Equality; Gender Equality; Women; Women Discrimination; Women Equal Rights, Add Tags
Add to My Group(s)
Go To Commenting
The views expressed herein are the sole responsibility of the author and do not necessarily reflect those of this website or its editors.