There are so many terrible, voter-suppressing Secretaries of State at work this year, actively trying to undermine democracy in the U.S. on behalf of the Republican Party, it's been difficult to adequately cover them all. One who has largely managed to escape our wrath on these pages -- thanks to his horrible colleagues in places like Florida, Ohio and Pennsylvania keeping us so busy -- is Colorado's Sec. of State Scott Gessler.

Think Progress helps us to slightly  make up for our failing today...

"Colorado Secretary of State Scott Gessler (R) has decided not to pursue a voter purge he initiated by sending letters asking almost 4,000 voters to prove their citizenship. After 482 people responded with proof and almost 90 percent of the suspected non-citizens were verified through a federal database, Gessler planned to challenge 141 names still in question, but does not have enough time to handle the hearings before Election Day.

"Instead, he is handing over the names to county clerks who may challenge them at the polls or when they receive absentee ballots. So far, one person has voluntarily come forward as a non-citizen in Larimer County. The county clerk explained:

'It was a guy with a work visa. He didn't even know he was registered to vote. Somehow we think it was a clerical mistake at the Department of Motor Vehicles when he got his driver's license.'

Of course, we don't know how many, if any, of those 141 people, out of Colorado's 3.5 million registered voters [PDF] are actually non-citizens, but it's good to know that Gessler is spending time and state resources looking out for them by risking the removal of thousands of voters from the rolls to protect against the long-shot possibility that 141 of them may (but likely won't) cast illegal votes.

The story in CO is very similar to the one earlier this year in FL, where Gov. Rick Scott and Sec. of State Ken Detzner attempted an identical and similarly failed plan to remove so-called "non-citizen voters" from the rolls.

Meanwhile, Republicans in the state of Texas are also unhappy, because the Rule of Law keeps keeping them from disenfranchising voters through discriminatory Congressional redistricting maps and discriminatory polling place Photo ID restriction laws.

So maybe the old "dead voters on the rolls" gambit will work to keep some of those pesky voters from being able to cast their legal votes this year in Texas! Ya know, the same gambit that failed so spectacularly in South Carolina earlier this year when hundreds of supposedly "dead voters" had the temerity to, ya know, be alive.

Still, thousands upon thousands of registered voters die each and every year, in almost all 50 states, and very very few of them have the courtesy to call the County Clerk afterwards to inform them that they have died and should be removed from the voting rolls. But, no worries! Texas Republicans are on the case in the Lone Star State!... 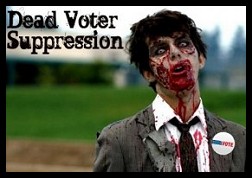 (Image by Unknown Owner)   Details   DMCA
...Or, at least, they would be, if the voters they've decided are dead in Democratic-leaning Harris County (Houston), for example, were actually as dead as they had hoped...

Nine thousand citizens in Harris County, Texas recently received letters warning them their voter registrations may be cancelled because they might be dead. If they were in fact still alive, these voters had 30 days to respond or be purged from the rolls.

But on Monday, Harris County Tax Assessor-Collector and voter registrar Don Sumners announced he would not purge any of the contested names from the voter roll, at least until after the election. After receiving about 300 complaints from the allegedly deceased voters, Sumner decided the list of names compiled by the Texas Secretary of State was too unreliable.

"We're not even going to process any of the cancellations until after the election. Because we've gotten such a response from people that say that they are still alive," he said.

Happily, the officials in Harris County are doing the right thing. But what of the thousands of voters in Texas' other 253 counties? Or, at least the Democratic-leaning ones where Republicans are sure to pretend there is massive "voter fraud" being carried out by zombie voters? How many legitimate voters in those counties will show up to vote on Election Day this November only to find out that they are no longer on the rolls because they are "dead"?

We've covered a lot of voter suppression and election fraud issues over the years here at The BRAD BLOG, but we've never seen anything along the lines of the massive, coordinated effort we are seeing across the country this year in our near-decade on this beat. While our coverage of Election Integrity matters is decidedly non-partisan, that doesn't mean we do not call out those responsible, by name, when they attempt to game the system.

To that end, it is absolutely shameful what the Republican Party is attempting to do to undermine the core American value of democracy in this country this year. Respectable Republicans, if there are any who have not yet been run out of the party, ought to be raising holy hell with their party leadership about what they are doing to undermine the one single right that protects every other one in our nation, the right to vote. This is horrific.

Brad Friedman publishes Bradblog.com
Related Topic(s): Fraud; Republican; Voter Disenfranchisement; Voter Fraud; Voter Registration Databases, Add Tags
Add to My Group(s)
Go To Commenting
The views expressed herein are the sole responsibility of the author and do not necessarily reflect those of this website or its editors.