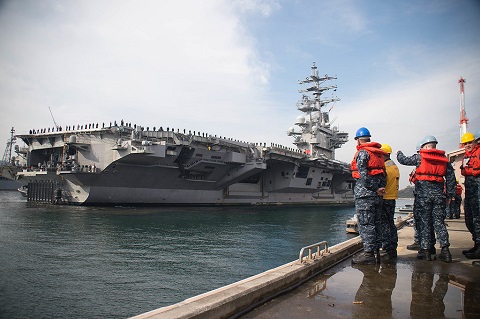 Contrary to ruminations from far right-wing Republicans, including Senators Tom Cotton of Arkansas and Marco Rubio of Florida, as well as fundamentalist crackpot Jerry Falwell, Jr., that COVID-19 involves either a willful or accidental biological warfare operation set in motion by China or North Korea, the facts are that the deadly virus involves no military or intelligence service. The fact that every military and intelligence service on the planet has been negatively impacted and severely hobbled by the virus is evidence that there are no strategic military winners and only losers with respect to the pandemic. It is Donald Trump's senior Republican officials and evangelical supporters who are pushing such nonsense that COVID-19 is a biological warfare attack. It is proof of the paucity of any level of military or intelligence expertise in the Republican Party and the Trump administration.

Two U.S. aircraft carriers in the Pacific have been idled by onboard outbreaks of the coronavirus. They are the USS Ronald Reagan in Yokosuka, Japan and the USS Theodore Roosevelt in Guam. The amphibious assault ship, USS Boxer, and the Arleigh Burke-class guided-missile destroyer USS Russell are both tied up in San Diego after coronavirus outbreaks. There are reports of similar out of commission U.S. naval vessels in the Atlantic, Persian Gulf, and Mediterranean.

With at least one reported virus case at the Naval Recruit Training Command in Great Lakes, Illinois, the Navy and Marine Corps are under pressure to halt recruit training at Great Lakes and at Marine Corps boot camps in South Carolina and California.

The impact of the coronavirus on U.S. military readiness has prompted the Pentagon to order individual commands to stop reporting the number of cases to the public. All reports about U.S. military coronavirus cases will be filtered through the Department of Defense's spinmeisters at the Pentagon. This decision is sure to enrage foreign governments that host U.S. military forces, particularly the German government. There are 80 infected personnel at America's Stuttgart base, the home of European Command (EUCOM) and U.S. Africa Command (AFRICOM) headquarters. There are 125 cases among U.S. forces throughout Germany. At least six cases have been reported among U.S. forces in Japan and perhaps dozens in South Korea.

Propagandized U.S. reports, emanating from the usual suspect right-wing sources, have suggested that China is taking advantage of the coronavirus's neutralizing of U.S. military naval forces in the Pacific and ground forces in South Korea, Okinawa, and Guam. What U.S. warhawks refuse to discuss is the toll the virus has had on forces of the Chinese People's Liberation Army and Navy, including the out-of-action Chinese aircraft carriers Shandong in Hainan island and Liaoning in Dalian. North Korea's leader, Kim Jong Un, has been feverishly firing off rockets in a display of strength because his ground troops have suffered from deaths and illness brought on by the coronavirus. Japan's Yomiuri Shimbun reported that since February around 100 North Korean troops, mostly stationed along the border with China, have died from the virus. The situation in Pyongyang is also said to be quite grave with thousands of suspected coronavirus positive individuals under strict quarantine.

There are reports from around the world of other navies being forced to bring their ships and submarines into home port and evacuate the crews into quarantine and medical treatment. Reports surfacing in Murmansk suggest that the Russian submarine Orel (K-266), an Oscar-II class nuclear-powered submarine, [right] suffered a coronavirus outbreak and is now idled at its home port in Zapadnaya Litsa on the Kola Peninsula with its crew quarantined. The same reports suggest that other submarines, ships, and floating docks that make up the Russian Northern Fleet are out of commission from the virus with their crews under quarantine.

Around the world, troops are being recalled back to their home countries. These include U.S. military forces at three bases in Iraq, as well as units stationed in Afghanistan. Finland has recalled its contingent in Iraq. The British Army Training Unit in Kenya (BATUK) recently pulled out of its base in Nanyuki and headed back to the United Kingdom. The Dutch have also withdrawn their troops from Afghanistan and Iraq. The Spanish and Portuguese withdrew their military contingents from Iraq, as have the French. The U.S. called off its Defender-20 military exercise in Europe with other NATO nations. The Russians, in turn, canceled their military counter-exercise.

Cease fires between warring parties in conflict zones around the world have hastened the return of peacekeepers and foreign forces to their home countries. There have been shaky ceasefires called between Israel and Hamas and Israel and Hezbollah. Syrian rebels have also agreed to a tentative cease fire with Syrian government forces. A ceasefire between various warring factions has also been implemented in Yemen. The Libyan National Army under General Khalifa Haftar has agreed to a ceasefire with the rival Libyan government based in Tripoli. Communist rebels in the Philippines are recognizing a cease fire with government troops and English-speaking secessionists in Cameroon have also agreed to a cessation of hostilities with the central government in Yaounde. In Afghanistan, the Taliban has taken to decontamination and quarantines in the areas they control. How long these truces and ceasefires remain in force are anyone's guess, but the coronavirus has taken a heavy toll on belligerents on all sides.

In addition, the Central Intelligence Agency, French DGSE, and British MI-6 have all but halted their ground-level human intelligence operations around the world. Any foreign agent caught breaking local curfews and quarantines risks exposing their intelligence roles and links. This is a particularly acute situation in countries like Iran, China, North Korea, and Saudi Arabia.

Many field intelligence operatives and headquarters staff are working from home without the luxury of having access to classified documents and computerized data and information. The French DGSE has postponed entrance and promotion exams and halted all recruiting interviews until September. Training has also been largely halted at the CIA's training center in Camp Peary, Virginia. Only essential personnel are being asked to report for duty at the world's intelligence headquarters and other surveillance facilities.

Russia's domestic intelligence service, the FSB and the external intelligence agency, the SVR, are forced to resort to on-line intelligence collection activities, mostly through the use of network phishing operations designed to gain access to sensitive or classified databases.

The U.S. Defense Intelligence Agency (DIA) has enlisted the help of psychologists to gauge the psychological impact of the coronavirus on the readiness and morale of foreign military services. The operation has the personal backing of DIA director Lt. General Robert Ashley. It can be assured that the DIA's measures are being reciprocated by foreign military intelligence agencies looking at the U.S. military's posture. The highest priority intelligence gathering is currently being carried out by medical intelligence services like DIA's National Center for Medical Intelligence (NCMI) at Fort Detrick, Maryland. The focus of such medical intelligence gathering, which relies heavily on signals intelligence (SIGINT) collection, is the current health status of world leaders, senior foreign government and military officials, and top business tycoons.

Israel's cyber-intelligence assets are targeting prospective vaccines and other coronavirus treatments by hacking the emails and databases of top medical research institutes and hospitals, as well as pharmaceutical firms. Israel's computer sleuths have also been working overtime in attempts to interdict the supply chains for ventilators, respirators, and other personal protective equipment (PPE) for redirection to Israeli front companies in foreign countries.

Financial intelligence operatives, also working from home, have been tasked to assess the financial health of countries as national treasuries are being stressed to provide payrolls and other social assistance to citizens during the lockdowns being enforced in several nations.