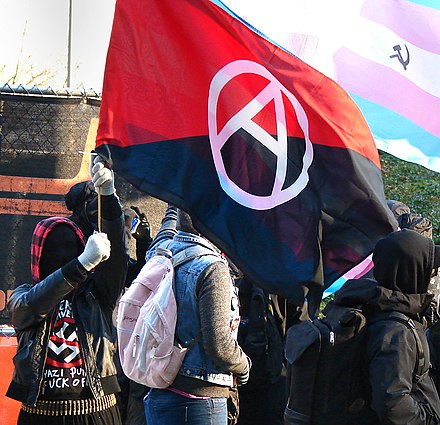 "I've occasionally encountered mass hysteria in other countries," Nicholas Kristof writes at the New York Times. "In rural Indonesia, I once reported on a mob that was beheading people believed to be sorcerers, then carrying their heads on pikes. But I never imagined that the United States could plunge into such delirium."

Kristof's writing about panic over suspected "antifa activity" in the Pacific northwest, but I think he's selling America short. We're a nation built on mass hysteria. From the Know-Nothingism of the 1850s, to the Palmer Raids of a century ago, to the McCarthyism of the 1950s, to the New Red Scare ("Russiagate") of the last four years, mass hysteria has been the perennial bread and butter of mainstream American politics.

I personally find the current freak-out over "antifa" -- short for anti-fascist -- revealing.

With respect to fascism, there are three possible orientations: Fascist, anti-fascist, and politically neutral. If the whole idea of antifa has you up in arms, you're clearly neither of the last two. Kind of narrows things down, doesn't it?

Fascism isn't an historical echo or a distant danger. It's the default position of all wings of the existing American political establishment, from the "nationalist right" to the "progressive left."

Those warring political camps are increasingly identity-based rather than ideological. They're more interested in seizing the levers of power for the "correct" groupings -- racial, sex/gender/orientation, economic, partisan, etc. -- than they are in the nature of, and inherent dangers in, that power.

Yes, many of those advertising themselves as "antifa" are just as much authoritarian statists -- in a word, fascists -- as their most bitter opponents.

And yes, both wings of the American political mainstream are actively attempting to co-opt the term for their own uses at the moment -- the "left" as a term of fake resistance to be channeled into business as usual voting, the "right" as an object of fear to be likewise channeled.

But false advertising, panic-mongering, and hostile takeoverism don't negate the existence of the genuine article. If you're not "antifa," you're "fa" or "fugue." Pick a side.

Related Topic(s): Antifa, Add Tags
Add to My Group(s)
Go To Commenting
The views expressed herein are the sole responsibility of the author and do not necessarily reflect those of this website or its editors.