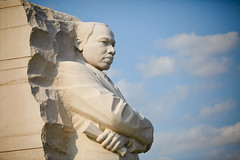 The ceremonies for the new Martin Luther King Jr. Memorial in Washington DC were kicked off on August 24 at an event billed as Honoring Global Leaders for Peace. But some of those honored are a far cry from King's beloved community of the poor and oppressed. The tribute to peacemakers, organized by the MLK National Memorial Foundation, was mostly a night applauding warmakers, corporate profiteers and co-opted musicians.

The night started out with great promise when MC Andrea Mitchell mentioned Dr. King's brilliant anti-war speech Beyond Vietnam as a key to understanding the real Dr. King. And sure, there were a few wonderful moments -- a song by Stevie Wonder, a speech about nonviolence by the South African Ambassador and a quick appearance by Jesse Jackson in which he managed to spit out a call to "study war no more."

But most of the evening's speakers and guests of honor had little to do with peacemaking. One of the dignitaries thanked at the start of the program was Israeli Ambassador Michael Oren, representing a country that uses $3 billion a year in precious U.S. tax dollars to commit war crimes against Palestinians.

Then came a parade of representatives of corporations that want to cleanse their image by being associated with Dr. King. The first was General Motors VP Eric Peterson. His company took billions from government coffers to keep it afloat, then showed its "generosity" by donating $10 million of our tax dollars to the memorial. Mr. Peterson gave a speech paying tribute to the company's first black board member, Rev. Leon Sullivan. Peterson claimed that the Sullivan Principles, principles that established a social responsibility code for companies working in South Africa, helped abolish apartheid. The truth is that the Sullivan Principles ended up being a cover for U.S. corporations -- like General Motors -- to continue doing business in racist South Africa instead of respecting the international divestment campaign.

Up next was Guy Vikers, president of the Tommy Hilfiger Corporate Foundation. Although the group Sweatshop Watch fingered Hilfiger for mistreating workers and inducted the company into its Hall of Shame, Hilfiger's $6 million gift to the memorial bought it a piece of the King legacy.

Next on the corporate sponsor list was Myrtle Potter of Medco Health Solutions. Medco is a $60 billion "pharmaceutical management" company that fought against health-care reform and was recently forced to pay the U.S. government $155 million to settle fraud charges. Other corporate benefactors to the memorial include union-busting Verizon, war profiteering General Electric and sweatshop king Wal-Mart.

After the line-up of corporate shills came U.S. trade rep Ron Kirk. One wonders how on earth a man who pushes free trade policies that destroy workers' rights and promote a race to the bottom was deemed a peacemaker. King's commitment to workers -- remember his support of the sanitation workers? -- was in total opposition to Ron Kirk's pro-corporate stance.

But the queen bee of the evening was former Secretary of State Madeleine Albright. She dismissed King's call that morality to be the guiding light of our international relations as nice, but far from the complex real world where we have enemies we have to confront. This is the same "practical" diplomat whose claim to shame in the eyes of true peacemakers was her support of such stringent sanctions against Iraq that over 500,000 children under 5 were killed. When asked about the morality of this policy on national TV, Albright calmly asserted that "the price was worth it" in the fight against Saddam Hussein.

Ms. Albright was awarded a model-size version of the King Memorial, presented by the controversial Chinese artist himself, Lei Yixin. Uninvited was the group that had spearheaded a campaign pressing the Foundation to choose an African-American artist, and use American granite and American workers. Instead the Foundation tried to save some money with a Chinese artist who used Chinese materials and Chinese workers. The human-rights-abusing Chinese government, delighted by the association with Dr. King, sweetened the deal with a $25 million donation. And despite written promises that the Foundation would use local stonemasons to assemble the memorial, Chinese laborers were used. The Washington area local of the Bricklayers and Allied Craftsworkers union claims the workers were not paid fairly, and their pay was withheld until they returned to China.

After the speeches and Stevie Wonder's song, the mic was turned over to an Israeli musician Idan Raichel, an avid supporter of the Israeli Army and someone who has publicly expressed approval of Israel's 2009 invasion of Gaza. One wonders how much the Israel government gave to the Foundation to get a plum spot in the tribute to peace.

But don't ask the King family how they feel about their fathers' opening tribute being sold off to the highest bidder. The family demands royalties for use of the King name -- even from the Memorial -- and so far have received about a million dollars. Cambridge University historian David Garrow, who won a Pulitzer Prize for his biography of King, said that King would have been "absolutely scandalized by the profiteering behavior of his children."

Today's great global peacemakers, the true followers of Dr. King, were neither seen nor evoked. No mention of Burma's struggling opposition leader Aung San Suu Kyi or the nonviolent protagonists of the Arab Spring or the environmentalists opposing a proposed tar sands pipeline from Canada to Texas who were arrested at the White House on the very day of the tribute. No mention of the U.S. peace groups trying -- for 10 years now -- to stop the horrifying Bush/Obama wars in Iraq and Afghanistan and the drone attacks in Pakistan that have killed so many civilians.

Dr. King, whose life was spent preaching unconditional love and nonviolent redemptive good, continues to inspire people the world over who are helping to shape his vision of an "arc of the moral universe" that is long but bends toward justice. Gandhi, King, Mandela -- there are precious few whose legacies resonate with those who are risking their lives today, in a nonviolent fashion, to eliminate the evils of racism, poverty, militarism and environmental destruction. King's tribute to global peacemakers should have reached out to them as the legitimate heirs of the King legacy, not the monied interests who helped pay for the piece of carved granite that bears his image.

Related Topic(s): Martin_Luther_King, Add Tags
Add to My Group(s)
Go To Commenting
The views expressed herein are the sole responsibility of the author and do not necessarily reflect those of this website or its editors.