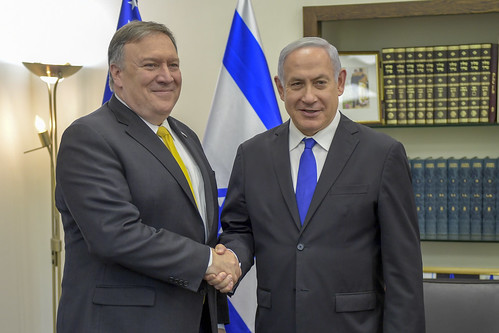 One of the most harebrained ideas to come down the pike in recent years is the proposed U.S.-Israel defense pact. The Jerusalem Post reports that Israeli Prime Minister Benjamin Netanyahu and U.S. Secretary of State Mike Pompeo "made progress" on finalizing the pact while meeting in Lisbon recently.

Imagine the American state being formally obliged to defend Israel no matter what. (It's clear the U.S. government has been informally, politically obliged since 1967, but Israeli officials have not wanted U.S. forces in the country. Israel receives $3.8 billion a year in military assistance, an investment that U.S. officials would not leave unattended if it were jeopardized.) This would be outrageous even if Israel confined its military actions purely to self-defense -- the government should not pledge American lives to another country's defense.

But in fact, Israel is one of the most aggressive nations on earth. Over the decades it has initiated wars against neighboring countries, not to mention against the Palestinians, most recently in the Gaza Strip. Israel portrays itself as threatened existentially by Iran, but in truth, Israel has been threatening and acting against Iran for a couple of decades. Israel's ally in the covert, cyber, and proxy-terrorist warfare has been the U.S. government. Iran has no nuclear weapons, but Israel does.

Not everyone in Israel wants a formal defense pact for fear that it would tie the Israeli government's hands. Netanyahu's political rival Benny Gantz and former security officials think this, but not everyone in Israel agrees. Some also see the proposed alliance as Netanyahu's cynical way to assure he is returned to power -- facing trial on corruption charges, he has failed to form a new government, despite two recent elections. Pompeo, who apparently wants to run for the Senate, may also be acting in his own political interest.

At any rate, the American people should resoundingly let the politicians know that the proposed collective defense arrangement with Israel should be scrapped.

No blood for Israel!

Sheldon Richman is vice president of The Future of Freedom Foundation and editor of FFF's monthly journal,  Future of Freedom . For 15 years he was editor of The Freeman , published by the Foundation for Economic Education in (more...)
Related Topic(s): Israel; NATO; Nuclear; Palestinian, Add Tags
Add to My Group(s)
Go To Commenting
The views expressed herein are the sole responsibility of the author and do not necessarily reflect those of this website or its editors.