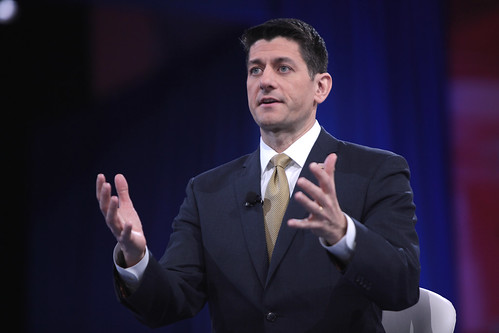 House Speaker Paul Ryan, in his press conference following the demise of his bill to replace Obamacare, blamed Republicans who had failed to grasp that the GOP was now a "governing party."

"We were a 10-year opposition party, where being against things was easy to do," said Ryan. "You just had to be against it. Now, in three months' time, we tried to go to a governing party where we actually had to get 216 people to agree with each other on how we do things."

It was, he said, "the growing pains of government."

Apparently Ryan doesn't grasp that he put forward a terrible bill to begin with. According to the non-partisan Congressional Budget Office, it would have resulted in 24 million Americans losing health coverage over the next decade, hardly make a dent in the federal debt, and transfer over $600 billion to the wealthiest members of American society.

The so-called "Freedom Caucus" of House Republicans, who refused to go along with the bill, wanted it even worse. Essentially, their goal (and that of their fat-cat patrons) was to repeal the Affordable Care Act without replacing it at all.

Ryan is correct about one thing. Congress is in the hands of Republicans who for years have only said "no." They have become expert at stopping whatever a president wants to do, but they don't have a clue how to initiate policy.

Most of the current Republican House members have not shared responsibility for governing the nation. They have never even passed a budget into law.

But their real problem isn't the "growing pains" of being out of power. In reality, the Republicans who are now control the House -- as well as the Senate -- don't like government. They're temperamentally and ideologically oriented to opposing it, not leading it.

Their chronic incapacity to govern didn't reveal itself as long as a Democrat was in the White House. They let President Obama try to govern, and pretended that their opposition was based on a different philosophy governing.

Now that they have a Republican president, they can no longer hide. They have no philosophy of governing at all.

Sadly for them -- and for the rest of the country, and the world -- the person they supported in the election of 2016 and who is now president is an unhinged narcissistic child who tweets absurd lies and holds rallies to prop up his fragile ego.

His conflicts of financial interest are legion. His entire presidency is under a "gray cloud" of suspicion for colluding with Russian agents to win office.

Here's a man who's advised by his daughter, his son-in-law, and an oddball who once ran a white supremacist fake-news outlet.

Related Topic(s): Debt; Health; Republican; Ryan-Paul, Add Tags
Add to My Group(s)
Go To Commenting
The views expressed herein are the sole responsibility of the author and do not necessarily reflect those of this website or its editors.