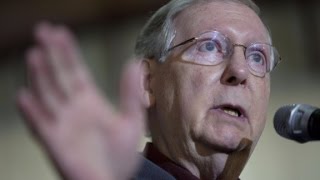 In my decades as a criminal defense attorney, I have never seen a trial where the jurors admit they aren't impartial, coordinate the trial process with the defendant and then, as promised, find the defendant not guilty. And yet, that is exactly what Senate Majority Leader Mitch McConnell aims to do.

Negating any semblance of conducting a fair trial, McConnell has brazenly declared his intention to violate the senators' oath of impartiality and deny the right to call witnesses to testify at the Senate trial on the articles of impeachment.

It's no wonder that the leaders of the House of Representatives are waiting to transmit the articles to the Senate until they receive assurances that the senators will hold a fair trial. Now that the House has voted to impeach Donald Trump for abuse of power and obstruction of Congress, the decision about whether to convict Trump and remove him from office will be made by the Senate. But that trial will be a farce and a sham if the Senate majority refuses to provide basic guarantees of fairness.

Senate Minority Leader Chuck Schumer and McConnell are at loggerheads over how to proceed with the trial. Schumer sent a proposal for ground rules, modeled on those used during the Clinton impeachment, to McConnell. Schumer requested that the trial begin on January 7 and that each side have a time limit to present its case. He asked that four witnesses with direct knowledge of the facts be called to testify for a maximum of four hours each. They are Acting White House Chief of Staff Mick Mulvaney; former National Security Adviser John Bolton; Mulvaney's senior adviser Rob Blair; and Michael Duffy, Associate Director of National Security at the Office of Management and Budget. All four refused to appear in response to subpoenas from the House during its impeachment inquiry.

McConnell rejected Schumer's proposed witnesses, stating that it is the House's "duty to investigate" and the Senate will not volunteer for a "fishing expedition."

Speaking on the Senate floor the day after the House passed the articles of impeachment, McConnell referred to the House impeachment inquiry a "slapdash process," calling it "the most rushed, least thorough impeachment in modern history." He accused Speaker of the House Nancy Pelosi of wishing that "the Senate should supplement [House Intelligence Committee Chairman Adam] Schiff's sloppy work."

But Trump took actions that denied the House committees valuable evidence. In an unprecedented move, Trump ordered all executive branch employees to defy committee subpoenas and refuse to testify in the impeachment inquiry. He also refused to turn over any subpoenaed documents, another contrast with prior impeachments. Trump asserted that subpoenaed witnesses who declined to testify would receive "absolute immunity" from criminal or civil prosecution. That doctrine is a creation of the Department of Justice's Office of Legal Counsel. No court, statute or constitution has ever recognized it.

Nine witnesses followed Trump's order and refused to testify. Nevertheless, 17 witnesses provided depositions and 12 witnesses testified in the House proceedings. They were members of the Trump administration and they provided overwhelming evidence of Trump's impeachable conduct.

The article of obstruction of Congress was based on Trump's blanket refusal to provide documents and allow subpoenaed witnesses to testify before the House of Representatives, to whom the Constitution grants "the sole power of impeachment."

If witnesses are not allowed to testify at the Senate trial, it "would be the first impeachment trial in history that heard no witnesses," Schumer stated on the Senate floor in response to McConnell's remarks. The Senate has never "prevented House managers from fairly prosecuting their case," Schumer added. If, as McConnell insisted, the House's case for impeachment is so weak, why is he "so afraid of relevant witnesses and documents?" Schumer asked. All four proposed witnesses are top Trump officials and Schumer said he doesn't even know if their testimony would incriminate or exculpate Trump.

McConnell favors a pro forma trial with no witnesses that leads to a rapid acquittal of Trump. On Fox News, McConnell told Sean Hannity there was "zero chance" Trump would be removed from office. McConnell pledged "total coordination" with the White House and Trump's defense attorneys. The senators, who will sit as jurors at the trial, must take an oath of impartiality. But McConnell didn't even pretend to be impartial, declaring, "I'm not an impartial juror ... I'm not impartial about this at all."

What does a fair trial require?

To have a fair trial, both sides must be allowed to subpoena witnesses and documents. The House managers, as well as Trump, should be permitted to call witnesses and present documentary evidence. McConnell seeks to violate that right.

Harvard law professor Laurence Tribe, who has advised the House Judiciary Committee during the impeachment inquiry, thinks the House can leverage its power over the timing of the transmittal of the articles to the Senate. "It would be justified to withhold going forward with a Senate trial," he wrote in the Washington Post. "Under the current circumstances, such a proceeding would fail to render a meaningful verdict of acquittal. It would also fail to inform the public, which has the right to know the truth about the conduct of its president." Tribe tweeted, "Schumer's proposal to McConnell. If he rejects these reasonable ground rules & insists on a non-trial, the House should consider treating that as a breach of the Senate's oath & withholding the Articles until the Senate reconsiders."

Related Topic(s): Impeach; Impeached; Impeachment; McConnell-Mitch; Senate; Trump, Add Tags
Add to My Group(s)
Go To Commenting
The views expressed herein are the sole responsibility of the author and do not necessarily reflect those of this website or its editors.