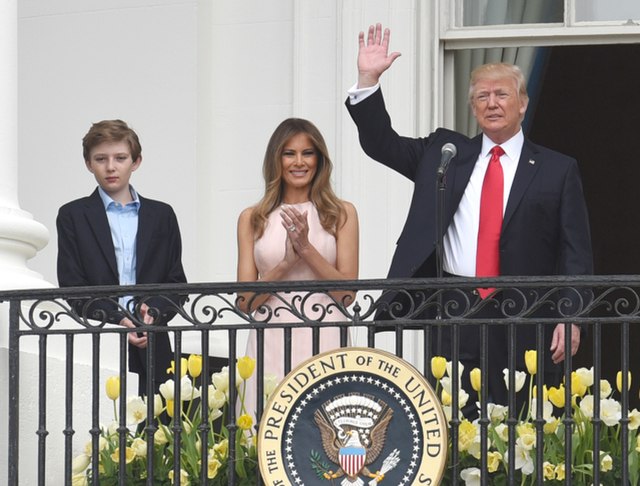 n October of 2016, a Wall Street Journalarticle claims, Donald Trump's lawyer paid $130,000 to buy the silence of Stephanie Clifford, better known to viewers of adult films, at any rate as "Stormy Daniels." Daniels, it's alleged, was set to tell the story of a 2006 sexual encounter with Trump on Good Morning America and in Slate.

Now-president Trump and Daniels deny (through the attorney) both the encounter and the alleged payoff, but as I write this In Touch magazine now claims to have the true scoop. In 2011, the magazine claims, Daniels described the encounter in an interview and passed a lie detector test to substantiate her story.

Trump has been married three times. His second marriage was to Marla Maples, with whom his affair while still married to his first wife, Ivana Trump, had been covered in excruciating detail in the American press.

Around the time of the alleged payoff to Daniels, a tape of Trump from before the alleged encounter (and from around the time he married Melania Trump) came to light in which Trump was heard bragging about his pursuit of a married woman and that "I don't even wait. And when you're a star they let you do it. You can do anything ... Grab them by the ..."

I'm sure you can fill in the blank there, which is pretty much my whole point: Is this latest bit really informative?

By Election Day -- November 8, 2016 -- everyone who wanted to know the truth about Donald Trump's sex life, marital foibles, etc. had received a crash course on them.

And then America voted.

Those who voted for Trump believed his denials (and will presumably continue to disbelieve them no matter how many breathless exclusives follow this one), or voted for him in spite of what they knew (and would likely do so again), or just didn't consider the issue important (and probably still don't).

Those who voted against Trump because of their perceptions of how he treats women or how honest he is when it comes to, among other things, marital vows can feel smug and affirmed, I guess, but their minds were likewise already made up and are almost certainly going to stay made up.

As American philosopher and psychologist William James is (perhaps apocryphally) said to have noted, "a difference which makes no difference is no difference at all." The addition of the Stormy Daniels story to the legend of Donald Trump is that kind of difference.