Background: For first-time readers, Gary White was a county commissioner in Jefferson County, Alabama. Good friends with Les Siegelman, he introduced Les's brother, [former] Alabama Governor Don Siegelman to Richard Scrushy, a local Republican businessman. Because of this, White became inextricably intertwined with Siegelman, who was one of the biggest targets of the Rove-directed, heavily politicized Department of Justice.

Scrushy and Siegelman were later indicted and convicted on charges stemming from that relationship. According to affidavits provided by Gary [and Judy, who was also in the room] White was asked to perjure himself before a Grand Jury in order to make the case against Siegelman and Scrushy. White refused and the very next day, the DOJ started delivering subpoenas to build a case against him. White is now serving ten years in Edgefield Federal Prison in South Carolina.

My guest today is Judy White. Welcome back to OpEdNews, Judy. How're things going down at Edgefield Prison? 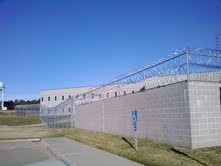 Thanks, Joan, and what a question. There has just been so much going on, but let's start with today, because today is an emergency. At least, it would be an emergency for any of us.

What if you had no heat in your home last night? What would you have done?

Gary, along with all the other prisoners, had no heat last night, and they have no hot water. After more than a week with no hand soap in the restrooms, they were finally given some yesterday, but no hot water, and only the option of washing their hands (and themselves) in icy water when they are already freezing inside. And while there is no heat, the system continues to blow - COLD air.

Like I said, it would be an emergency for most of us, and I know I would call someone to get it fixed, but in the meantime, I would be able to stay with family or friends, rather than be forced to endure such conditions. But the prisoners have been told it should be repaired in "a couple of days" as those who are responsible leave and go home.

I'm in Chicago and I just had my furnace replaced. While they worked that whole long day, I had no heat at all and it was pretty unbearable. Isn't South Carolina balmy and warm? How cold are we talking, Judy?

This morning when I checked weather.com, it was 33 degrees; the predicted highs in the coming days range from low-50s to mid-40s. When I visited last week, it was 32 degrees at 2:00, according to my car's temperature reading. But also keep in mind that it's a concrete block building with no floor coverings. And they are required to dress in a "uniform" that is a green short-sleeve shirt with matching pants.

Yikes! Doesn't sound balmy at all. The prisoners can't even wear a sweater?

They have coats, and Gary slept in his, as I suspect others did. But they are always having counts, and from what I understand, they have to be "in uniform" for the counts, so I don't know whether they can wear coats. Their shirts and pants have an attached white label with their last name and number. If the labels have to be seen during the counts, the coats wouldn't allow that. Between counts, they can put on everything they have. Gary did that last night, but was still too cold to sleep.

It sounds pretty brutal to me. Beyond the extreme discomfort, isn't this a potential health hazard?

Absolutely, and not just for the prisoners. Everything you can read, particularly government documents, warns of the risks of illness and disease in prison, where prisons are notorious for medical neglect and abuse. So they deprive the prisoners of heat and hot water, the prisoners get sick, and they don't medically treat them. All the prison employees are exposed, and they go home and share with their family and friends, the people at the grocery store, the bank, and everywhere else they go. And with Christmas approaching, by this time next week, there will be families visiting from all over the country, who will then return to their home communities.

So, what confidence do you have that the prison authorities are handling this emergency situation with haste and due diligence?

None. It is obvious that, to them, it isn't an emergency, even though the absence of hot water also affects the food service and laundry. But they don't eat with the prisoners and they aren't dependent on having their laundry done at the prison. They can wear whatever they choose, and possibly even have supplemental heat sources, such as space heaters, in their offices. I have met only one prison employee who seemed to have a heart or soul, and she was banned from speaking with me again. (Merry Christmas, Ms. Johnson.)

The bottom line is this. I recognize that many people think of Alabama, where Gary and I live, as a bit slow or backward. But even in Alabama, it would be illegal to treat a dog, cat, or horse the way federal prisoners are being treated in South Carolina.

Where does this leave you? What's the next step?

I'm really not sure, but I am sure that what is being done at the prison in Edgefield is illegal. Honestly, we need help. We need someone to compel compliance with the law, and I don't know who that is or how to get them involved.

You must be pretty frustrated.

Yes, and so much more. But my suffering is nothing compared to the desperate conditions and abuse to which Gary and so many others are subjected. There are over 2200 men with no heat or hot water, who endured freezing last night and remain cold today. Someone who can do something must care.

For some reason, I was under the impression that there were 200 prisoners, not 2200.

And yes, it's over 2200, more than 500 at the camp, plus the adjacent prison - all without heat or hot water. The camp's capacity is less than 250, but they have over 500, and getting new ones all the time. Gary's "living quarters" are 88 square feet, and there are two men, at one time there were three men, living in that space with everything they are allowed to have.

Well, I hope the men get some heat and hot water really, really soon. Thank you for talking with me, Judy. Hang in there.

Other pieces in my series with Judy:

Related Topic(s): Alabama; Interviews; Prison Industrial Complex; Prisoner Abuse; Prisoners; Prisons - Penal System; South Carolina, Add Tags
Add to My Group(s)
Go To Commenting
The views expressed herein are the sole responsibility of the author and do not necessarily reflect those of this website or its editors.