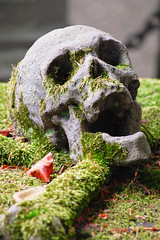 (Image by Unknown Owner)   Details   DMCA
Image by [ henning ] via Flickr
Sorry folks, but the bankers have robbed you of your future social security checks. You see there were trillions for the bankers and a trillion or so for wars, but there is no money for you.

What, you say you are paying into social security?

Then we had this economic depression and the government had to bail out the super rich bankers from the bubble economy they created.

Besides Social Security is a form of socialism and we all know socialism is no good. That is unless it is socialism for the bankers then it is really good.
See Story Below
Source: CNNMoney.com

The recession has taken its toll on Social Security. The officials who oversee the program forecast Tuesday that the Social Security trust fund will be exhausted by 2037 -- four years earlier than estimated last year.

The trust fund reflects a $2.4 trillion surplus paid into Social Security over 20 years that Uncle Sam has borrowed, spent and promised to pay back. Trust fund exhaustion represents the point at which only 76% of benefits could be paid out.

The main reason for the change in forecast: Demand for benefits has grown while money paid in has fallen because of growing unemployment and new tax breaks in the economic stimulus package passed in February.

Since the start of 2008, 5.7 million payroll tax jobs have disappeared. And another 4.3 million jobs are being filled on a part-time basis.

In the nearer term, the trustees estimate that Social Security will take in fewer taxes than the benefits that will be paid out by 2016. Last year, they estimated the near-term shortfall would occur in 2017.

Those who describe Social Security's situation as a crisis point to the 2016 date as the most important, because that's when the government has to start paying the system back with interest.

"When Social Security needs to draw down the 'surplus,' the Treasury will have to borrow money, raise taxes or cut other spending in order to redeem the IOUs," said Charles Konigsberg, a federal budget expert at deficit watchdog group the Concord Coalition.

Others, however, say that benefits can be paid out in full for the next few decades, and that the Social Security surplus has helped the government avoid borrowing more than $2 trillion over the past 20 years. CONT....

Related Topic(s): Social Justice; Social Security; Social Security Privatization; Social Security Trust Fund Borrowing; Socialism; Socialism, Add Tags
Add to My Group(s)
Go To Commenting
The views expressed herein are the sole responsibility of the author and do not necessarily reflect those of this website or its editors.