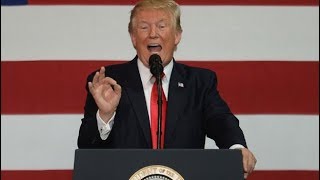 The marginal tax rate on corporate profits in the United States is 35 percent. As President Donald Trump and other proponents of tax reform continually say, this is the highest rate in the world. This is true -- but also incredibly misleading.

Due to loopholes, the actual tax rate on corporate profits is close to 20 percent, putting the U.S. right around the middle among wealthy countries.

This numbers-versus-reality gap should be kept front-and-center in the debate over reforming the corporate income tax. If someone argues that U.S. corporations pay too much in taxes, they are not being honest.

Corporations in countries like Germany and the Netherlands pay a comparable share of their profits in taxes. High taxes are not putting our firms at a competitive disadvantage.

Furthermore, as a matter of simple arithmetic, if our corporations pay less in taxes, the rest of us will have to pay more.

In both cases, the deficit surged. If there was any positive impact on growth, it was too small to notice and certainly not enough to offset the impact of the tax cut.

The lesson from these prior experiments is that tax cuts lead to less revenue, which means larger deficits. Many of the same people now pushing for tax cuts will start screaming about large deficits when we see a fall in revenue.

This leaves two options: cutting spending or raising taxes on the rest of us. Neither of these prospects looks good for people who don't own lots of stock in corporate America.

Cutting waste is always popular, but the reality is that there is not much waste sitting there waiting to be cut. The spending that will be slashed is for areas like Social Security, Medicare and Medicaid, programs that have already shown up on the Republican hit list.

There is an alternative route that is more worker-friendly. Corporations are able to reduce their tax rate from the legislated 35 percent rate to the actual rate of 20 percent through a wide variety of tax avoidance measures. Many people also get very rich from developing tax avoidance strategies, including many in the private equity industry.

These tax avoidance strategies are a complete waste from an economic standpoint. We want people to make money by developing better products and services, not from devising creative ways to beat the IRS.

Dr. Dean Baker is a macroeconomist and Co-Director of the Center for Economic and Policy Research in Washington, D.C. He previously worked as a senior economist at the Economic Policy Institute and an assistant professor at Bucknell University. (more...)
Related Topic(s): Corporate Personhood; Corporate Taxes; Loopholes; Republican; Taxes, Add Tags
Add to My Group(s)
Go To Commenting
The views expressed herein are the sole responsibility of the author and do not necessarily reflect those of this website or its editors.